Jemison hopes to build on convincing win over Isabella

By Austin Franklin | Special to the Advertiser

The Jemison Panthers cruised past the Isabella Mustangs 69-27 on Tuesday in the first round of the Chilton County Basketball Tournament.

Jemison was led by center Ryan Thompson, and the Panthers imposed its will defensively and stifled the Mustangs from start to finish.

Coming out the gate strong, Jemison opened the game with a 17-4 run that set the tone for the game.

Jemison took advantage of Isabella’s zone defense on offense and consistently exploited gaps in the Mustangs coverage by aggressively attacking the paint.

When the Mustangs did force bad shots, they lacked the height advantage of Jemison, who were able to frequently get offensive rebounds and reset on offense. 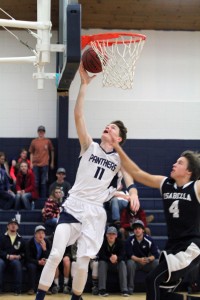 Will Johns (left) of Jemison attempts a layup with Jeffrey Buchanan of Isabella right on his heels in defense. (Photo by Brandon Sumrall / Special)

In addition to Jemison’s offensive rebounding making life difficult for Isabella, as its balanced offense made it impossible to merely key onto one player. In total, the Jemison Panthers had six players score at least six or more points.

With their defense struggling in the first half, the Mustangs were led in scoring by Ryan Headley who did his best to keep pace with the Panthers offense.

Headley finished with 10 points and helped mitigate the damage in the second quarter, but going into the half the Mustangs still trailed Jemison by a score of 35-16.

Any hopes of the Mustangs closing the gap were dashed in the beginning of the second half. The Panthers went on a 16-2 run to open the second half and effectively seal the game prior to the start of the fourth quarter.

The Panthers defense picked up where it left off and made open shots few and far to come by for the Mustangs.

The fourth quarter provided the opportunity for the bench to get into the game and Hunter Hood took advantage, scoring 12 points in the second half, mainly from behind the arc.

Panthers head coach Stacy McGehee reflected on the playing time for his bench after the game.

“We got a lot of our guys playing time tonight, which hopefully helps a little bit down the stretch where we can play a few more people. It helps us get those guys in a game this week before the semis and before a tough Maplesville team.”

Thompson finished the game with 13 points to lead all scorers for the Panthers.