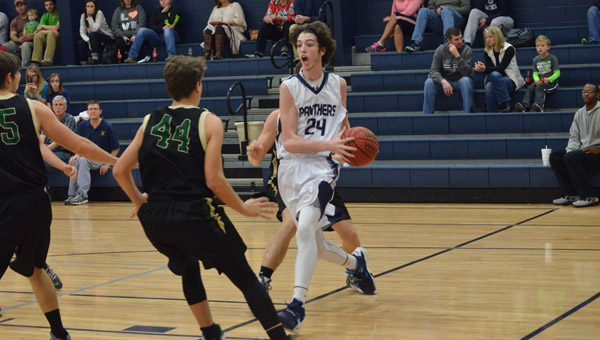 Jemison’s Ryan Thompson drives along the baseline on his way to the basket. Jemison’s basketball program has been a bright spot after a Dec. 14 victory over Central High School. (File)

Editor’s note: Below is a look back at the top sports stories of 2015.

Champions crowned in county basketball tournaments
The undefeated Thorsby Rebels girls basketball team prolonged its winning streak by one more game as they proved too much for Jemison in a 52-41 win on Jan. 13.
Back-to-back three-pointers by Lilyana Barnett and a free throw by Robinson helped the Rebels to a 15-6 lead at the end of the first period.
Five points from Robinson led the Panthers during a 9-0 run to start the second period and made the score 24-6 early in the second period.
Karmen Mims added another three-pointer for the Panthers, but with just 1:45 to play, it did little as the Rebels held on for the win and the county championship.
Robinson led the Rebels with 19 points, three rebounds and four steals. Barnett added 15 points, including five from three-point range, 10 rebounds, two steals and a block for Thorsby.

Thorsby girls basketball remains unbeaten after area championship
The Thorsby Rebels girls basketball team captured the AHSAA Class 2A, Area 9 tournament championship with an absolutely dominating performance, defeating Vincent 59-42 at home Feb. 6.
The Rebels opened up with a 17-8 run, capped off by a Sabrina Ellison basket to end the first quarter with a nine-point lead.
The Rebels picked up where they left off to begin the second quarter, with Keri Robinson kicking off the quarter with a basket and added a three-pointer before Ellison added a basket to extend the lead to 24-8.
Robinson then added another basket, with Barnett closing out the half with a pair of free throws to send the two teams to the locker room for halftime with the score 33-17 in favor of the Rebels.
Adison Argent got the second half started with a basket, which kicked off a 10-2 run to open the quarter. Robinson, Ellison and Marisa Jones all added baskets to give the Rebels a 43-19 lead with under 5:30 to go in the third.
“I thought Keri Robinson was just outstanding,” head coach Ab Argent said. “She kind of carried us. We were pretty good defensively, and it was just a hard-fought game.”
Robinson led the Rebels with 32 points, while Ellison had 10.

Baseball player of the year named
Tyler Owens has always been a good hitter, but The Clanton Advertiser’s Baseball Player of the Year became a great hitter his senior year thanks to some hard work on June 15. 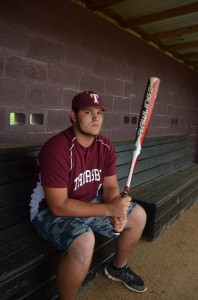 Tyler Owens of Thorsby was named The Clanton Advertiser’s Baseball Player of the Year following an outstanding season at the plate. (File)

Owens, who has batted in the clean-up position of the order for Thorsby’s varsity team since his sophomore season, made an effort to be able to hit the ball the other way.
It’s safe to say he was successful, as Owens put up incredible numbers during a senior season that included him leading THS to the second round of the state playoffs: 40 hits in 78 at-bats for a .513 batting average to go along with a .638 on-base percentage, 25 runs scored, 41 runs batted in and nine home runs.
“I felt more comfortable in the box,” Owens said. “I was able to hit any kind of off-speed stuff or anything [on the outer portion of the strike zone].”

Area athletes compete in All-Stars Sports Week
Three local athletes competed in the Alabama High School Athletic Association’s North-South All-Stars Sports Week.
Maplesville High School graduate Tyler Armstrong competed on the South’s football team, while Jemison High School senior Cameron “Banks” Woodley and Maplesville senior Trevor Wallace competed on the South’s baseball team.
Both were held in Montgomery, the football teams went head-to-head on July 17, while the baseball doubleheader took place on July 21.
Each of the three athletes arrived in Montgomery a few days prior to their games to practice, bond and form a functional team from players who’ve likely never met before.
For Armstrong, this was one of the most difficult but enjoyable elements to the All-Star experience.
While Woodley and Wallace have one more year to make plans for college, they both foresee sports in their future.

Jemison wins county volleyball tournament
With wins over Thorsby (25-15, 25-13) and Isabella (19-25, 25-18, 15-10), the Jemison Panthers took home the first-place trophy on Oct. 3 and the title of 2015 Volleyball County Tournament champions.
Down 12 points and with the Mustangs just two points away from closing out the first set, Leslie Hague took over serving duties for the Panthers and led a nine-point Jemison run.
However, the Mustangs finally broke the serve, and with the score at 24-19, a ball hit out of bounds by the Panthers brought the first set to a close.
Set 2 started much the same way as the first set, but this time the Panthers got the early kick start behind a five-point run on the serving of Kelsey Lowery for an early 8-2 lead.
The Mustangs battled throughout the set but were never able to cut into the lead created during the early Jemison run, and with the score at 24-18, a Cassani Steele kill ended the set and tied the match at one set apiece.
Caley Booth served through a three-point run for the Mustangs to draw Isabella to within two points of the lead at 8-6, but another three-point run behind the serving of Hannah Robinson extended to JHS lead to 11-7.
The Mustangs again cut into the Panthers’ lead to bring the score to 12-10, but a kill by Tayor Ray gave the serving duties back to Jemison to set up a three-point run to close out Set 3 at 15-10 while giving Jemison the tournament championship.
Steele, who was named the tournament’s Most Valuable Player, led the Panthers with 16 kills, while Hague added 16 serve points for Jemison.

Jemison boys basketball earns signature victory
Jemison’s boys basketball team avenged a Dec. 8 loss at Central High School of Tuscaloosa with a 49-46 home victory over Central, who entered the game on Dec. 14 ranked No. 6 in Class 5A.
“It meant a ton, because most guys on the team had never beaten a team ranked that high,” Jemison guard Wes McGehee said. “Everyone was screaming and giving high-fives after the game.”
The second half belonged to Jemison, as the Panthers outscored Central thanks in large part to shooting 58 percent as a team from the free throw line.
“We have to out-hustle whoever we’re playing because most teams that we play have a lot more talent than us,” Jemison head coach Stacy McGehee said. “The guys realize how important each possession is in a game.”
McGehee spurred the effort late in the game by knocking down seven-of-nine free throw attempts during the fourth quarter.
“The crowd appreciates the effort that they see from the boys on the court,” McGehee said. “Our gym is a definite home court advantage with the support that we are getting right now.”
Will Jones provided 13 points off the bench and contributed his share of timely baskets and defensive stops. Tremont Bryant added eight points and three assists.
“They don’t really care who does what as long as we do something good,” McGehee said. “They seem like they have fun playing with each other, and it’s an enjoyment to watch.”