Size down low was the deciding factor as Chilton County High School’s girls basketball team edged Verbena 55-39 in the first round of the county tournament at Jemison High School on Monday.

The Tigers frustrated Verbena throughout the game and quickly created an advantage on the defensive end and on the boards.

Chilton County led 24-18 at the halftime break, and it did not take long into the third quarter before the Tigers’ post presence was felt yet again.

Kaley Lucas and Lexis Blackman began to slowly take over the game in the second half, as they combined for 25 of Chilton County’s 31 points.

“How those girls rebound and play down low has always been a strength of the team,” Chilton County head coach Robert Bradford said. “They continued to do a good job of going down there and battling their hearts out.”

On several occasions, they displayed their athleticism by turning a rebound into a fast break opportunity at the other end of the court. 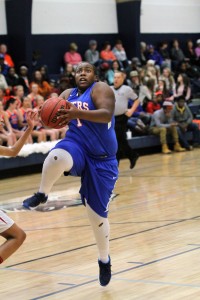 Lexis Blackman of Chilton County High School displays her athleticism as she elevates on her way to the basket. (Photo by Brandon Sumrall / Special)

“At halftime, we started to figure out how they were passing the ball,” Lucas said. “We were getting the hang of it and were able to [break through] in the fourth (quarter.)”

The comfortable nature that they exhibit with the ball in their hands is a luxury for Bradford, and an aspect of their game that he continues to see develop.

“All three girls that play down low are juniors and they have been in the program,” Bradford said. “They are doing things now that they couldn’t have done at the beginning of the year, and that’s what you want to see from any team.”

Despite the success, Bradford understands that they have shown the ability to be better and that signs were evident of the recent time off.

“We were real sloppy on offense and turned the ball over, which is about what you would expect coming back from Christmas break,” Bradford said. “We didn’t play with the same type of intensity that we normally do.”

Verbena mounted a second half comeback that was led by its guard combination of Candice Williams and JaNiya White.

White finished with a team-high 21 points, while Williams had an uncharacteristic scoring night with just four points.

As Williams became more of a facilitator, Makayla Mims made up for the lack of offense with seven points.

“It got close there at the end, but the girls bowed up,” Bradford said. “That is what I am most proud of along with the fact that every girl on the team got in and contributed in some form or fashion. It was a good team win for us.”

Blackman led the Tigers with a game-high 26 points, while Lucas scored 16 points.

With the win, the Tigers move on to face No. 1 seed Thorsby on Thursday at 6 p.m. in semifinal action at Jemison High School.

Jemison and Maplesville were scheduled to play on Tuesday while the other semifinal matchup is set for Friday at 6 p.m. between the winner of that game and Isabella.

The championship game will be played on Saturday at 6 p.m.