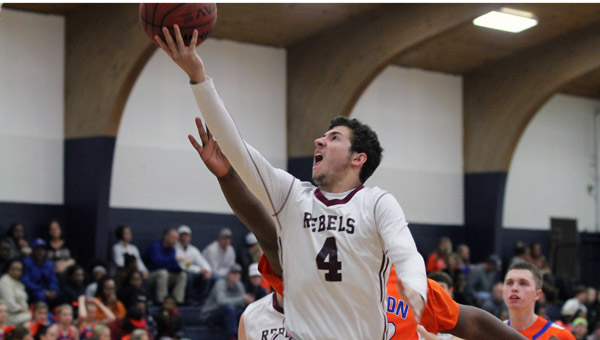 Brock Higgins of Thorsby reaches for the rim as he drives down the lane. (Photo by Brandon Sumrall / Special)

The Thorsby boys basketball team lost 79-64 to Chilton County High School in the first round of the county tournament on Monday hosted by Jemison High School.
The Rebels entered the tournament as the No. 4 seed and had its sights set on a deep run.
However, the early exit will force Thorsby to revaluate as area play is on the horizon.
“There have been several games that we could have won, but for whatever reason we’ll pick a quarter to get cold in,” Thorsby head coach Tim Fortner said. “We don’t score enough points to beat somebody when that happens.”
On Monday night, the lack of sustained offense in the second quarter came back to haunt the Rebels.
Thorsby trailed 36-22 at halftime, but managed to cut the deficit to six points by the end of the third quarter thanks in large part to the long range shooting of senior guard Brock Higgins.
“We dug ourselves a hole not being able to score in the second quarter,” Fortner said. “We exhausted ourselves trying to get out of it.”
Higgins’ precision from beyond the arc carried over into the fourth quarter, as he buried back-to-back three pointers that shrunk Chilton County’s lead 53-51.
“We missed 14 or 15 free throws and they nearly missed in the second half,” Fortner said. “When they had opportunities to make easy ones, they made them. That was the difference in the game.”
Two points was the closest the Rebels came from the lead, and Thorsby was unable to fully complete the comeback.
“It’s not about running something different,” Fortner said. “We’re getting open looks, and now we’ve just got to make them.”
Jemison’s B-team defeated Isabella 29-19 earlier in the night.
The Thorsby girls squad is the No. 1 seed in their portion of the bracket, and will face Chilton County at 6 p.m. on Thursday.
Semifinals will be played Thursday and Friday with one girls and boys contest each day beginning at 6 p.m. The Championship games for each bracket are Saturday with the girls’ title beginning at 6 p.m. and the boys shortly after.
Both of Jemison’s teams enter the tournament as No. 3 seeds, and both teams were scheduled to play Tuesday after press time. Look for updated information on NorthChiltonAdvertiser.com and in next week’s edition of The North Chilton Advertiser.

Cassani Steele of Jemison kisses a shot off the glass for an easy layup. (Photo by Anthony Richards / Advertiser)... read more