After being open for business since May 1994, American Industrial Metals Inc. owner Ray Hardesty has retired.

“It was just time,” Hardesty said. “I am just ready for the next adventure.” 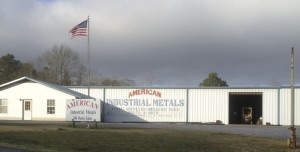 The business officially closed Dec. 31, 2015, and Hardesty said he remains thankful for the employees who worked at the business throughout the years.

American Industrial Metals Inc. was started by Hardesty after he worked in the motion picture industry doing special effects for movies and television.

Hardesty met Rhonda Jones and they married in 1991.

“Rhonda wanted to move back to Chilton County which was her home,” Hardesty said. “She wanted to open a law practice.”

According to the release, the company had a customer base that ran the gamut from cities and counties to farms, repair facilities and contractors.

Some of the accounts throughout the years included Shelby Concrete, Chilton Paving and Asphalt, Jimmy Durbin Farms, Raymond Coody Farms and Carada.

“I am not closing the business because anything bad happened,” Hardesty said. “I am just at the stage in life where I am ready for a change.”

At one time, the business had five employees including three full-time, and two part-time employees.

Hardesty also would hire students from Chilton County High School during the summer to work at the business.

“As my decision to retire came up, the employees I had working for me were made aware and found other employment,” Hardesty said. “I am very appreciative for the work my employees did.”

Although Hardesty said he has no specific plans for his retirement, he does plan to work on old and new hobbies and enjoy life.

“I am just going to enjoy a new change,” Hardesty said.