Chilton County High School’s varsity boys basketball team cut its Christmas break short to go back to the hardwood on Dec. 28 and compete in the Calera Christmas Tournament.

CCHS picked up a 63-56 opening-round win over the host Eagles to set up a championship game contest on Dec. 29 against Francis Marion, but the Tigers fell short of their championship aspirations as the Rams won, 70-44. 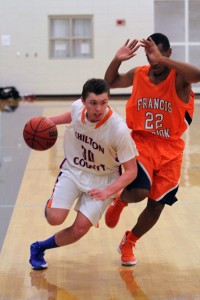 Chilton County High School’s Tolliver Gilliland (left) scored a team-high 12 points on 4-for-5 shooting from behind the three-point line in a loss to Francis Marion on Dec. 29 in the championship game of the Calera Christmas Tournament. (Photo by Brandon Sumrall / Special)

Kiviante Williams started the championship game with a three-point basket for the Rams, but Tolliver Gilliland answered with a three of his own for the Tigers to tie the game at 3-all. Joshua White gave the Tigers a one point lead at 7-6, but Williams sank a basket to swing the lead back to the Rams.

With the Rams leading 10-9 with four minutes left in the period, a Chilton time out saw the substitution of all five of the Tigers starters and set up a 13-0 run by the Rams to bring the first period to an end with Francis Marion leading 23-9.

The Rams’ run continued into the second period and was finally stopped with a basket by Mondez Jones, but the Tigers trailed by 14.

Six unanswered points by the Rams put the Tigers in a 20-point deficit, but a three by Cade Hatch and two by Gilliland helped cut the deficit to 17, 37-20.

The Rams outscored the Tigers 10-4 through the remaining three minutes of the first half to take a 47-24 lead to the halftime break.

The two teams traded blows through the third period, but the Rams managed to extend their lead to 65-39 at the end of the third.

With both teams going deep into their bench in the fourth, the Rams cruised to the win.

Gilliland led the Tigers with 12 points, all from three-point range on a 4-for-5 performance from behind the arc.

Williams and Tyrone Pryor both put up 15 points for the Rams.

Cassani Steele of Jemison kisses a shot off the glass for an easy layup. (Photo by Anthony Richards / Advertiser)... read more