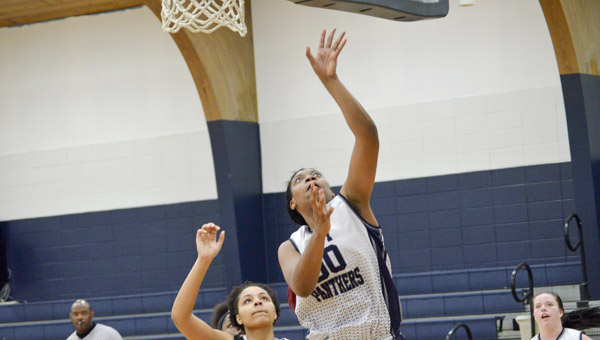 Cassani Steele of Jemison kisses a shot off the glass for an easy layup. (Photo by Anthony Richards / Advertiser)

“We’ve got to quit making turnovers,” Jemison head coach Robert George said. “At the end of the day, that’s what beat us. Free throw shooting and turnovers are our biggest weaknesses right now.”

After the Panthers trailed 18-7 at the half, Jemison’s stagnant offense came alive and scored 37 points in the second half.

It was a complete turnaround for the Panthers which grabbed the momentum, and the enthusiasm of the majority home crowd.

“I don’t fault the players because they came back and played probably the best half of basketball that we’ve played all year,” George said. “Hopefully we’ll learn from it.”

Jemison would finally grab a 42-40 lead following a Karmen Mims three-pointer from the right corner.

However, the lead would not last, and the Panthers inability to finish out games came back to hurt them yet again.

“You get more experience on the floor against different teams and styles,” George said. “Playing this many good teams will eventually pay off. There were definitely things that we did better.”