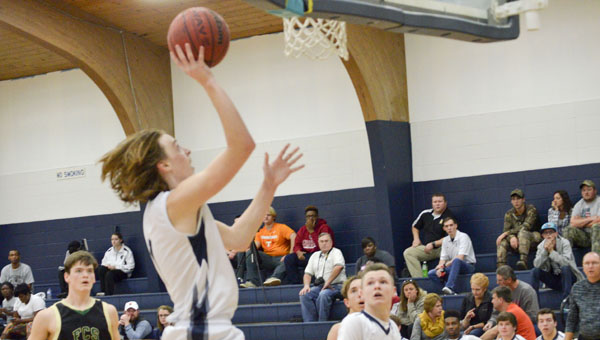 Mason Jones of Jemison soars through the air on his way to a layup. (Photo by Anthony Richards / Advertiser)

By Anthony Richards and Brandon Sumrall

An opening round loss to Thomasville sent the Jemison Panthers varsity boys into the losers bracket of their Christmas Tournament, and playing in the losers bracket third place game against the Central Coosa Cougars on Wednesday.

The Panthers shot just 1-for-7 during the first period, which created a 17-point first period deficit.

It proved to be an early hole that Jemison never recovered from, as the Cougars went on to post a 72-41 win and take home third place in the tournament.

Both teams started the first period having a hard time finding the basket before Cody Thompson sank the game’s first basket at the 4:36 mark of the period.

At the end of the first period, the Cougars held a 22-5 lead.

Richardson and Leachman exchanged baskets to start the second period, as William Johns added a basket to start a 5-0 run by Jemison which made the score 26-12 midway through the second.

Wesley McGehee added a basket from beyond the arc along with a pair of baskets from Mason Jones. As a result, the Panthers cut the deficit to 30-19. 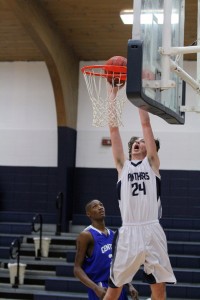 Jemison’s Ryan Thompson reaches for the rim as he attempts a dunk. (Photo by Brandon Sumrall / Special)

A couple more baskets by the Cougars and a basket by Leachman sent the game to the half with Central leading 36-21.

Tremon Bryant opened the third period with five consecutive points for the Panthers, and a basket by Ryan Thompson made the score 44-28 with 4:36 to play in the period.

Thompson got the Panthers started in the final period with a two-point basket, while McGehee added one from the free throw line.

Jones also added another basket for the Panthers with 5:38 to play, but Central outscored Jemison 13-9 in the final period.

Leachman led the Panthers with nine points and two rebounds.

Jemison completed a second half comeback to defeat Friendship Christian School 58-54 during its Christmas tournament on Tuesday.

The Panthers trailed 27-19 at halftime and by 14 points midway through the third quarter.

“The mindset heading into the second half was to quit turning the ball over and to play a little bit of defense,” Jemison point guard Wes McGehee said. “We got outhustled.”

Eric Evans drained a three-pointer, as Jemison’s first points of the second half came with 2:28 to play in the third quarter.

His basket ignited some energy into a sluggish effort, and shortly after, the Panthers established an offensive rhythm and began to chip away at the double-digit deficit.

“We had a starter hurt, so we had some different lineups today,” McGehee said. “It took us a while to figure out the roles that we had put some people in. Finally it just clicked, and thank goodness.”

Jones scored nine of his 11 points in the fourth quarter, including a stretch in which he scored eight points as Jemison went on a 9-2 run.

“Everybody is not going to have a good game every time, but we all have the mindset that we can get better with every play,” Jones said. “As a senior, I feel like I can help pick my teammates up when they’re not having their best night.”

The majority of Jones’ success was a direct result of penetration and a relentless nature around the rim.

“We took too many threes the first half and we began attacking the rim, and finishing around the basket,” McGehee said.

Thompson finished the game with a team-high 13 points, while Evans tallied double figures as well with 10 points.

Christmas tournament not so jolly for Isabella