Christmas tournament not so jolly for Isabella 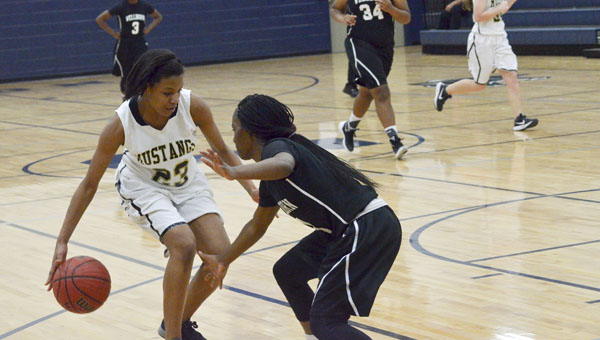 By Anthony Richards and Brandon Sumrall

A matchup between the Thomasville Tigers and Isabella Mustangs on Wednesday afternoon decided third place in the Jemison Christmas tournament.

Despite a hard fought battle by the Mustangs, the Tigers proved to be just a bit to much as Thomasville pulled out a 45-39 win.

Kiara Ford put the first points of the game on the board for the Mustangs, but was quickly answered by a basket from Alexandria Newberry for the Tigers.

Elisa Sturdivant and Newberry made the Tigers’ lead six, while free throws from Synia Chattman and Caley Booth brought the score to 8-5 late in the period.

Chattman gave the Mustangs their first lead with back-to-back baskets, and Isabella led 9-8 at the end of the first quarter.

Two free throws by Ford and a basket by Chattman extended the Mustangs’ lead to five.

Two baskets for the Tigers and a free throw by Hailey Underwood brought the score to 14-12, but a basket from Newberry tied the game at 14-all.

Seven unanswered points by the Tigers were accompanied by free throws from Ford and Booth along with a basket from Emily Booth, as Isabella trailed 21-18 at the half.

Chattman drew the Mustangs to within one point, and a free throw by Booth tied the game at 21 just shy of two minutes into the third quarter. 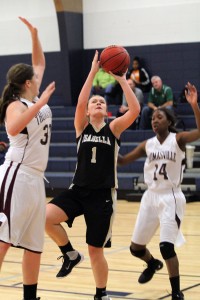 Hailey Underwood attempts a shot in traffic between a pair of Thomasville defenders. (Photo by Brandon Sumrall / Special)

Sturdivant and Chattman exchanged baskets, while Tirana Blanks Underwood pushed the game to 25 points for both teams.

With the game tied, Booth gave the Mustangs a one-point lead, but a three-pointer by Blanks swung the lead back in favor of the Tigers.

Blanks added another Tigers basket, and with a basket from Newberry, Thomasville took a 35-29 lead into the fourth quarter.

Booth started the fourth with a basket for Isabella, but was answered by three baskets from Blanks, which grew the Tigers lead to 10, 41-31.

Alexis Owens cut the lead to seven and Booth trimmed it to five with 35 seconds to play.

That was the closest the Mustangs would get to having gained the lead.

Missed free throws came back to haunt Isabella’s girls basketball squad, as the Mustangs lost 43-32 to Walter-Wellborn during Day 2 action at the Jemison Christmas Tournament.

Isabella trailed 21-18 at the half, but saw the deficit continue to grow as the offense sputtered throughout the second half.

The Mustangs only managed two points in the third quarter, and a major reason was a lack of consistency from the free throw line.

“It was only the second game this season that we shot under 50 percent from the free throw line,” Isabella head coach Jared Day said. “We took the whole week off, and that’s on me.”

An aggressive nature was shown offensively, but Isabella failed time after time to convert Walter-Wellborn fouls into points on the scoreboard.

“It’s probably has more to do with trying to make the shot instead of just getting up there and going through the routine,” Isabella point guard Synia Chattman said.

Despite the frustrations from the foul line, the Mustangs continued to fight back with a three-pointer from the right wing by Booth which cut the deficit to eight points with a minute to play.

Booth launched another on the next possession, but it fell short and ended any hopes of an Isabella comeback bid.

“It’s tough to know what to say after a loss like that,” Day said. “It was just one of those games.”