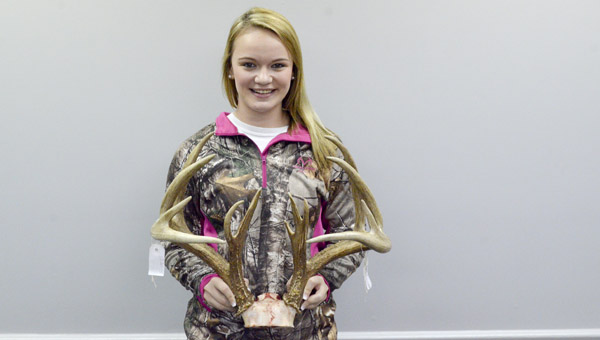 Every hunter dreams of their first kill, and one day taking the big one.

For Hailey Underwood, a junior at Isabella High School, the two experiences happened at the same time.

Underwood killed her first deer while on a hunt with her father in Chilton County on the evening of Dec. 19.

According to Underwood, her father accompanied her in the shooting house and nearly two hours had passed before a pair of does appeared but were too far away. However, as soon as she lowered the gun, a buck walked out into the open.

“[Dad] told me to get my gun ready and to focus on the deer and not the horns,” Underwood said. “It took about 10 minutes to turn the right way in order to shoot. I wasn’t too nervous because he kept me calm.”

Her shot was on target, and she successfully killed a buck. Underwood and her father had the deer graded, and it landed in the 180 class. The figure was gathered by measuring the width and size of the deer’s antlers.

The typical average class for a deer ranges from 130 to 150. According to Boone and Crockett Club, the world record for a typical whitetail deer was posted in 1993 in the 213 class.

“I didn’t know how big it actually was until we got down there,” Underwood said. “I just kept looking at it, because I was in shock.”

She used a 7 millimeter-08 rifle that was just given to her as an early Christmas gift. Prior to going out on the hunt, she had only fired practice rounds with the gun.

According to Underwood, she started hunting when she was 13 years old and wouldn’t pull the trigger at all in the beginning.

“It definitely makes me want to hunt more, but I will probably never top that again,” Underwood said. “We went and sat there plenty of days. I felt like nothing was ever going to happen, but you just never give up.”

With her father by her side throughout the entire experience, the hunt has quickly become a source of family pride.

“They’ve been bragging and telling everybody,” Underwood said. “People I don’t even know have been asking about it.”

Excellence recognized: From left to right, Maplesville’s Devan Wallace, Will Harrison and Terence Dunlap were three of the local high... read more