A look back: Fatal shooting, standoff in Jemison 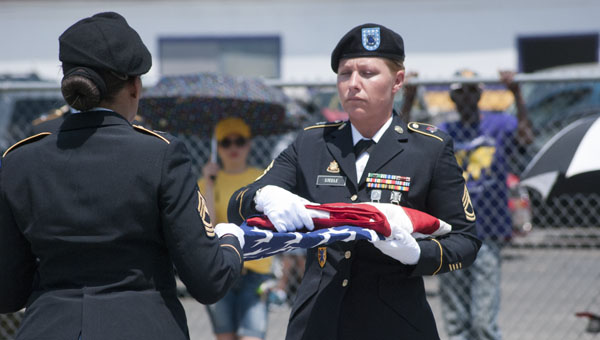 SFC Jessica Steele and MSG Crystal Bennett Hawkins fold an American flag as part of a ceremony to dedicate a memorial at E.M. Henry Park to two soldiers who died in the service of their country.

Below is the second installment of a four-part series looking back at the top news stories of 2015. This installment covers April through June. See future editions of The Clanton Advertiser for the rest of the year in review.

A Clanton man fatally shot a woman April 13 who had fled to a nearby doctor’s office in an attempt to escape him.

After the shooting at Jemison Internal Medicine, located off U.S. Highway 31 in Jemison, 25-year-old Eric Heath Price returned to the nearby home he shared with Leaj Jarvis Price, 24, and barricaded himself inside, leading to a lengthy standoff with police, according to Jemison Police Chief Shane Fulmer.

The shooting occurred at about 9:15 a.m. Leaj Jarvis Price died from a gunshot wound to the head, Fulmer said.

He had suffered what appeared to be a self-inflicted gunshot wound to the head and was taken to UAB Hospital. The injury was not considered life-threatening.

“Preliminary investigation indicates that the suspect and victim had been involved in a domestic altercation that lead her to the doctor’s office asking for help,” Fulmer said in a press release. “While she was standing in the lobby with witnesses, the suspect entered with a firearm in hand and approached the victim. After words were exchanged, the suspect fired a single shot, striking the victim.

“No one else in or around the area was harmed. The doctor’s office staff immediately locked themselves in a back room until the office was secured by law enforcement. Officers quickly found the staff and removed them from the building to a safer location.”

As Price exited the residence, he had what appeared to be a self-inflicted gunshot wound to the head, Shearon said.

“We got him without incident from that point on,” Shearon said.

Shearon said officers did not fire shots at the suspect, and he never fired shots at them. No one but the victim was shot at the doctor’s office.

“Our hearts and prayers go out to the victim’s family during these horrific and terrible times,” Fulmer said.

Jemison and Thorsby schools were placed on lockdown as result of the situation, according Chilton County School Superintendent Tommy Glasscock.

Nearby businesses, including Pizza Hut, Subway and Anytime Fitness, were forced to close, and traffic was diverted off the stretch of Highway 31 running in front of the residence.

The project at the intersection of U.S. Highway 31 and Alabama Highway 22 began April 21.

Clanton Police and Chilton Contractors began closing the intersection and implementing detour routes at 12:01 a.m. April 21, so the detour will be in effect for morning commutes on April 21.

All downtown roads remained open during the project, other than the intersection.

A Chilton County woman will spend the rest of her life in prison after pleading guilty to a capital murder charge for the 2010 death of a Clanton woman.

Tanya Renee Vandyke, 44, pleaded guilty to capital murder involving murder in the commission of rape in the first degree, and was sentenced to life in prison without the possibility of parole, for the death of Tracy Brown, 44, who was Vandyke’s first cousin.

Vandyke, who lists an address in Billingsley, stood before Chilton County Circuit Judge Sibley Reynolds shortly after 10:30 a.m. April 20 and pleaded guilty to one of her charges. She was originally charged with two counts of capital murder involving murder in the commission of rape in the first degree and murder in commission of sodomy in the first degree in connection with the death of Tracy Brown, 44, of Clanton, in 2010.

As part of her plea agreement, prosecutors agreed to dismiss the capital murder charge involving murder in the commission of sodomy in the first degree.

Vandyke’s case was scheduled to go to trial Aug. 24, according to court records.

Vandyke will spend the rest of her life at Julia Tutwiler Prison for Women in Wetumpka.

In May 2014, a Chilton County jury heard gruesome and graphic details about the way James Osgood and Vandyke attacked Brown on Oct. 13, 2010, in Brown’s bedroom.

Osgood was a co-defendant in the case and was Vandyke’s boyfriend at the time of the murder.

He was sentenced to death in June 2014 by Reynolds on two capital murder convictions.

Both Osgood and Vandyke forced Brown at gunpoint to perform sexual acts with both of them before Osgood slashed Brown’s neck several times with a knife or knife-like object and later in the back twice before she died on the bedroom floor of her trailer off County Road 24.

After five years of dealing with the haunting reality surrounding the murder, the family of Tracy Brown said in April they could finally move forward.

“We know nothing will bring Tracy back to us, but this will help us move forward with our lives,” said Brown’s stepmother Jackie Wileman. “This has been a tremendously long road for all of us, but it is nice that we can have some closure.”

Excellence recognized: From left to right, Maplesville’s Devan Wallace, Will Harrison and Terence Dunlap were three of the local high... read more