Whooping cranes to fly over county after Christmas 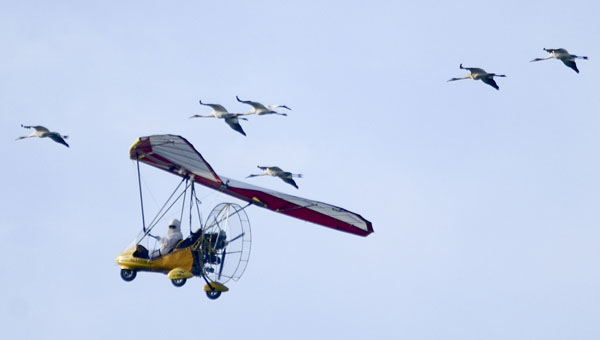 Six endangered whooping cranes will spend Christmas in Winston County before attempting to continue their journey across the country. The birds are scheduled to stop in Chilton County some time after Christmas. (Contributed)

Six endangered whooping cranes will spend Christmas in Winston County before attempting to continue their journey across the country.

“Weather has definitely been a factor for us this year,” said Heather Ray with Operation Migration. “Since we started the journey on Sept. 30, we have run into a lot of issues with weather.”

The captive-hatched cranes are led on a migration from Wisconsin to Florida by ultralight aircraft, acting as surrogate parents.

The birds make a stop each year in Chilton County before heading to Florida.

Each year, the non-profit organization Operation Migration raises a new set of hatchlings and prepares them for migration as part of an effort to bolster the population of the birds, which in the 1940s dwindled to 15.

The cranes are hatched at the U.S. Geological Survey Patuxent Wildlife Research Center in Maryland.

They are shipped to Wisconsin 50 days after hatching and taught to follow a specially designed ultralight aircraft.

Their training continues from June through September.

Eventually, they follow a team of two ultralight aircraft on their first migration.

Members of Operation Migration decided to take a short break for the Christmas holiday and will return to Alabama Dec. 28 with plans to continue the migration process if weather permits.

The birds will be stationed in Winston County with Colleen Chase and Jeff Fox who are with Operation Migration.

When the rest of the migration team returns to Alabama, there will be a stop in Walker County and then a stop in Chilton County.

“Right now it is hard to say an exact date of when we will be in Chilton County, but if weather cooperates it could be sometime the week after Christmas,” Ray said.

For those wanting to catch a glimpse of the birds this year, Operation Migration has a daily blog with location updates.

In previous years, on the day the birds are scheduled to leave from a particular area, they typically fly out before 7 a.m.

This year, Operation Migration has started a petition for individuals to sign to continue the ultralight flights.

The petition is in response to the U.S. Fish and Wildlife Service that published a “vision document” recommending that the ultralight aircraft guided release method of introducing the whooping cranes be terminated.

Members of Operation Migration found that scientific data shows the ultralight method to be the “most effective” in terms of short-and long-term survivability, pairing, reproduction, and migratory behavior, according to the petition.

Ray said the birds were introduced to a new location in Florida in 2011 due to some of the birds previously having issues with black flies.

“Whooping cranes typically take about four years to begin breeding so it is hard to tell at this point if the new location has breeding success,” Ray said. “We feel it would be premature at this point to stop the ultralight method.”

For those interested in signing the petition, or learning more about the whooping cranes, visit www.operationmigration.org.