Verbena’s girls varsity squad was not as lucky as the boys team on Friday night, as they were out done 50-31 by the Isabella Mustangs. 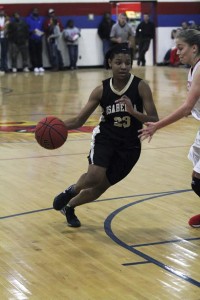 Synia Chattman of Isabella looks to drive around the Verbena defense. (Photo by Brandon Sumrall / Special)

Isabella started the game on a 6-0 run thanks to baskets by Synia Chattman and Sophia Underwood.

Makayla Mims of Isabella ended the run with two baskets from the free throw line.

Caley Booth and Mims brought the score to 8-4 in favor of the Mustangs as Isabella took a 12-6 lead at the end of the first period.

A three-point play by Booth was answered by baskets from JaNiya White and Candice Williams to make the score 15-9.

A free throw by Williams and a basket from White continued to cut the deficit to one midway through the second quarter.

Isabella went on to outscore the Red Devils 11-3 in the closing minutes of the quarter to take a 27-17 lead at the half.

The Mustangs’ run continued into the third period before a basket by White with 2:45 to play finally ended a 12-0 Isabella run.

White added another basket for the Red Devils, but Isabella ended the period with a 41-23 lead.

White started the fourth quarter with two points from the free-throw line for Verbena but was quickly answered by a basket by Booth.

Courtney Penton added a basket for the Red Devils, but five unanswered points by the Mustangs gave Isabella a 48-27 lead with 3:11 left to play.

White went on to add four more for the Red Devils down the stretch, but the Mustangs held on for a 50-31 win.

Chattman led the Mustangs with 18 points, eight rebounds and two steals, while White led the Red Devils with 17 points, six rebounds, two steals and a block.

Verbena and Billingsley duel on hardwood