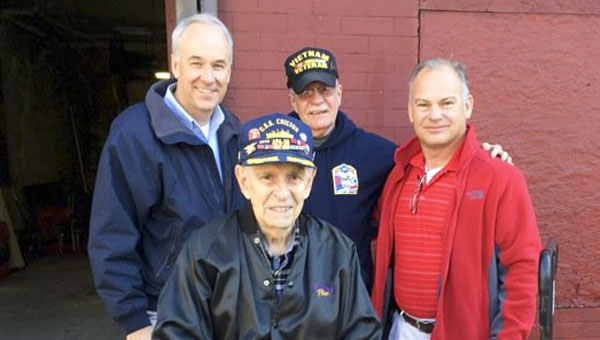 On May 29, 1943, a new Bayfield Class attack-transport ship was commissioned at the Brooklyn Navy Yard in New York. APA-38 (Auxiliary-Personnel-Attack) was christened USS Chilton in recognition of the efforts of the citizens of Chilton County in raising money for the war effort through the sales of War Savings Bonds.

In 1942, Chilton County residents surpassed the quota of bond sales in less time than any other county in Alabama.

To commemorate commissioning of the vessel, a bronze bell was installed under the forward five-inch gun on the starboard side of the ship. Engraved “USS Chilton 1943” the 320-pound bell remained onboard the vessel during its remarkable 30 years of service. The bell was primarily ornamental but was frequently used when the ship was at anchor. The bell would be struck with a hammer, the sound traveling over the water to help personnel of small transient supply boats locate the ship during periods of heavy fog. 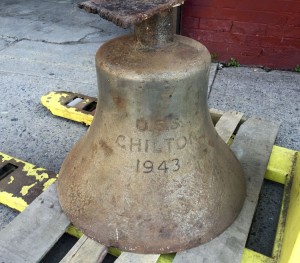 The Chilton County Republican Party will be coordinating with local veterans groups to present the bell to the county during the 2016 Memorial Day observance.

During World War II, the USS Chilton served in the Pacific Theater of Operations in support of the invasion of Okinawa. During this period, the ship and its crew survived a number of suicide attacks by Japanese boats and aircrafts.

Following the war, the USS Chilton continued to serve the people of the United States with distinction. The pride of Chilton County served as a “floating laboratory” during testing of the atomic bomb on the Bikini Atoll in the Pacific. In 1961, the vessel served in support of the covert effort to overthrow Fidel Castro in Cuba, an operation now known at the Bay of Pigs. During “Thirteen days in October “(1962), the USS Chilton participated in the naval blockade of Cuba to prevent Russian ships from transporting tactical nuclear missiles to the island. In 1969, the ship and crew served as a member of a task force to recover Apollo 10, the second mission to orbit the moon.

The USS Chilton was decommissioned in July 1972, bringing to an end the careers of a ship and crew that served with honor and distinction for more than three decades. After decommissioning, the USS Chilton was transferred to the Maritime Administration for lay up in the National Defense Reserve Fleet where it remained for two years on the James River at Fort Eustis, Va. The final chapter of the USS Chilton closed in 1974 as the ship was sold to a private firm for scrapping. Although the history of the ship had ended, the story of the Commissioning Bell had one final chapter to be written.

In 2004, the Commissioning Bell of the USS Chilton was discovered in a United States Navy construction warehouse in Missouri. Its 30-year journey from the scrap yard on the east coast to the naval facility in Missouri remains a mystery. When discovered, the bell had been painted a flat black color. Curious about the origin of the bell, navy personnel began removing the paint and soon discovered the engraved name of the vessel.