Verbena boys basketball (7-0) earned a 47-26 road victory over Isabella on Friday. The victory was the Red Devils’ second straight over a county opponent. 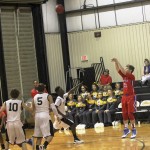 The Red Devils built a double-digit lead at the end of the first quarter and were able to maintain it throughout the contest.

Isabella scored eight points in the first half and struggled to find a consistent offensive rhythm.

With a 26-8 halftime lead, it did not take long for Verbena to capitalize on the Mustangs’ offensive woes. The Red Devils put the game away for good by outscoring Isabella 17-4 in the third quarter.

Juwan Tyus was the centerpiece of Verbena’s offensive success, as he connected on 12 shots from the field and finished with a game-high 25 points.

Hakeem Underwood and Dorian Parker tallied seven points each for the Red Devils, while Jacob Cleckler drained a pair of three-pointers and accounted for six points.

The Mustangs relied on the play of its talented underclassmen, and they did not disappoint. Jaqarise Stacy led the team with eight points, while Cornelius Stacy added six points of his own.

Verbena’s boys and girls basketball teams both handled their business and swept Shades Mountain Christian School in front of its... read more