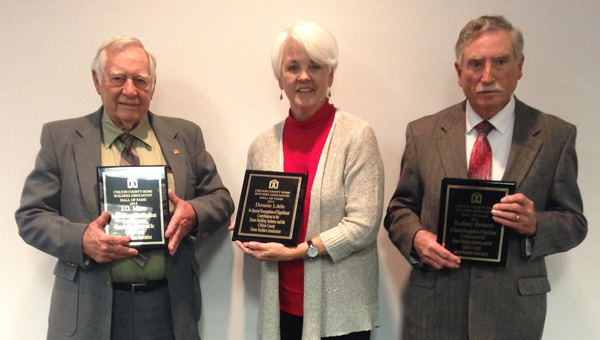 By Leisl Lemire | Special to the Advertiser

The Chilton County Home Builders Association inducted the first three members into its Hall of Fame during a meeting Dec. 9.

With the promise of more inductions to come in the future, President Rick Mims opened the festivities by introducing long-time member Tommy Seales to the lectern to lead in prayer.

The prayer served as a blessing on the food and those gathered as he thanked God for “this group of friends who get to work together.”

After the meal and fellowship, Russell Davis, president of the Alabama Home Builders Association, shared memories of past members and meetings that spanned over 40 years, highlighting specific remembrances of the three being honored and inducted into the Hall of Fame.

His adherence to following regulations and attention to detail earned him an excellent reputation among those in the business of building homes, according to remarks made at the ceremony.

He is retired now but continues to be an influence and mentor in the construction industry.

Benson is married to Dorothy Benson, and his son, Phillip has also been involved with the group.

J.O. Mims was humorously described as something of a legend.

A story was told that during a time when funding was short in government circles, the building inspector had to be delivered out to a property to perform inspections, often by the builder himself.

It was rumored that Mims considered leaving one behind if a favorable inspection was not provided.

Joking aside, it was noted that Mims served as president of the Chilton County Home Builders Association in 1979, 1983 and 1989. He served on the board of directors for the HBA of Alabama and helped with the Association’s Scholarship House that was built in 1969.

His late wife, Frances, attended many meetings with him, and he brought his son, Jeff, into the business and association as well.

He was best known for building affordable homes in Chilton County. Though he attempted to retire in 1994, he soon started building again and currently has a house nearing completion.

The last honoree of the evening was Donnie Little of Little Plumbing and Electric.

Little passed away in 2005 but was remembered fondly as a valuable member of the Home Builders Association.

Because he did the plumbing and electrical work for so many of the builders, he was described as being the “glue” that held the communication together between members of the association by keeping them informed of common issues and how the group could benefit them in finding solutions.

He served as president in 1988 and 1995 and served on the board of directors for the state of Alabama HBA.

Little helped organize fundraisers, such as gazebo and playhouse sales, and was active on many committees.

His wife Needra, who accepted his posthumous award, served as secretary/treasurer of the association for more than 10 years and attended local and state meetings with Donnie.