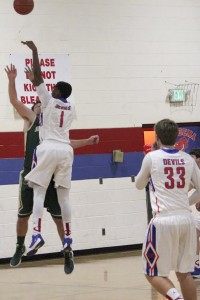 Juwan Tyus (No. 1) uses his size to shoot over a Shades Mountain Christian defender. (Contributed)

The boys defeated Shades Mountain Christian 70-57, as Juwan Tyus and Dorian Parker each finished the game with 20 or more points.

Tyus had a game-high 29 points while Parker contributed 20 points of his own. Their performances fueled Verbena to victory in a game that quickly turned into a shootout.

With all the points that the Red Devils scored on the night, only two came from three-point range. Tristan Short was responsible for both of those treys and tallied seven points.

In the earlier matchup between the two schools, JaNiya White helped orchestrate a 54-24 Verbena girls win over Shades Mountain Christian.

Candice Williams finished with 13 points and helped set up scoring chances for teammates on several other occasions.

White and Williams continue to grow together as a backcourt, and have turned into quite a dynamic duo early on this season.

“Both of them are sharing the basketball up and down the court,” Verbena girls head coach Christopher Doss said. “We just continued our play from the other night (a win over Billingsley on Monday).”

Taylor Mims also played a valuable role on the offensive end of the court and finished with seven points.

Verbena sets the pace against Billingsley