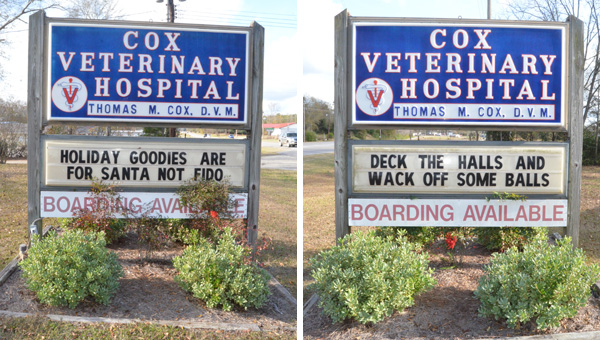 Attention grabber: The sign off Highway 31 north of Clanton for Cox Veterinary Clinic has been used to post messages about pet care during the holidays.

A popular image of pets during the holiday season is a cute puppy crawling out of a box on Christmas morning to a child’s delight.

The staff at Cox Veterinary Clinic would like for residents to have another thought: responsibility.

In an effort to increase awareness of the responsibility of owning a pet, especially during the holidays, the clinic has used its sign off Highway 31 north of Clanton to post attention-grabbing messages.

One side of the sign reads, “DECK THE HALLS AND WACK OFF SOME BALLS,” while the other side reads, “HOLIDAY GOODIES ARE FOR SANTA NOT FIDO.”

While the second message is self-explanatory, the first is a reference to having a male pet neutered.

The messages were posted Dec. 7. So far, most customers have had a positive response, Vaughn said, but there was one phone call from a man who seemed to take exception to the idea.

“You’re going to offend somebody no matter what,” Vaughn said.

The Cox staff said it can’t take credit for the message. A friend to the clinic saw a post on Facebook of a photo taken of a similar sign at a Texas veterinarian and shared it with the local vet staff.

The idea had to be run by Thomas M. Cox, DVM.

The other side of the sign is a reminder that people shouldn’t share “holiday goodies” with pets.

“We see a lot of vomiting and diarrhea around the holidays,” Vaughn said.

But spaying and neutering is a larger issue.

Vaughn said if any residents give or receive pets for Christmas, they should remember to have them spayed or neutered to help control the pet population.

Pets can be spayed or neutered at as young as six months of age.