The Jemison varsity boys basketball team jumped out to an early lead and never looked back on their way to a convincing 79-55 road win over Thorsby on Monday.

The Panthers grabbed a big lead in the first period, as Ryan Thompson and Mason Jones got things started for Jemison, but Thorsby baskets by Ben Thornton and Calvin Plyler quickly knotted up the game at four. 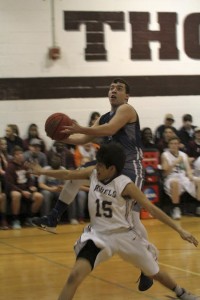 Robert Evans of Jemison maintains his concentration as he flies through the air with Thorsby’s Israel Garcia in close defense. (Photo by Brandon Sumrall / Special)

A Brock Higgins three ended the run, but a basket by Wesley McGehee set off another 7-2 run and a 21-10 lead for Jemison at the end of one period.

The up-tempo approach by both teams carried into the second period, as the Rebels managed to keep pace with the Panthers. Jones started the second period with a quick three points for Jemison, but was answered by baskets from James Sellers and Michael Fortner.

Fortner and Higgins again combined to cut the Panther lead to six. The Panthers added just two to their lead over the next three minutes and took a 40-32 lead to half.

Jemison began to build on their lead through the third period. Three points from McGehee got the second half started, and a basket by Thompson extended the lead to 13 points for the Panthers.

Tremon Bryant made a basket with 4:27 to play in the third and gave Jemison their largest lead of the game to that point, 54-36. Consecutive three pointers from Higgins and Fortner cut the lead to 12, but Robert Evans and Thompson again pushed the lead to 14, 63-49. Jemison took a 65-51 lead to the final period of play.

Thompson led the Panthers with 18 points, seven rebounds, and four blocks. Higgins and Fortner both picked up 15 points for the Rebels, as each player added two rebounds and three steals apiece.

By Brandon Sumrall | Special to the Advertiser The Thorsby Rebels varsity boys basketball team improved to 5-2 on the... read more