Despite an early lead by Jemison girls basketball, it was Thorsby that came away in the end with a hard fought 54-46 road win Monday night. 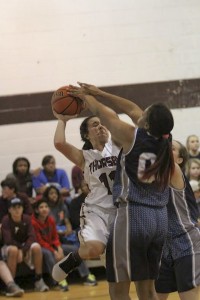 Taylor Ray. However, the Rebels started to chip away thanks to back-to-back baskets from Lilly Barnett that cut the deficit to six, as Jemison led 12-6.

Carmen Mims hit a three for the Panthers with 2:56 to play, but Zakeya Robinson answered with a basket that began a 7-0 run for Thorsby and brought the score to 18-17 in favor of the Panthers.

Just seconds into the second period, Sabrina Ellison hit the front end of two shots from the free-throw line and Lauren Wyatt rebounded the second shot and put it back in to give the Rebels a two point, 20-18 lead.

With 1:46 left in the period and the Rebels trailing by three, Robinson knocked down three from the free-throw line and tied the game at 28 while also starting an 11-0 run by the Rebels to take a 36-28 lead to the half.

Neither team scored much through the early minutes of the second half before Taylor Hayes and Barnett extended Thorsby’s lead to double digits, 44-30 with 1:50 left in the third.

Kiara Steele knocked down a shot for the Panthers that started a 10-0 Jemison run and cut the Rebels’ lead to four. At the end of the third, Thorsby led 44-40.

The two teams exchanged a couple of baskets to start the fourth period before baskets by Robinson and Hayes grew the Thorsby lead 49-42 with 3:26 to play.

The Rebels’ free throw shooting kept them out in front through the remainder of the game.

Barnett led the Rebels with 23 points, three rebounds, seven steals and one block.

Jemison was led by Cassani Steele, who finished with a double-double of 17 points, 14 rebounds and six blocks.

By Brandon Sumrall | Special to the Advertiser The Jemison varsity boys basketball team jumped out to an early lead... read more