A new substitute placement system being used by the Chilton County School System should make handling teacher absences easier for all involved.

Aesop allows teachers to create an “absence” online, and then automated phone calls are made to qualified substitutes. This most basic feature is one of many the system offers to benefit teachers, subs and administrators.

“Teachers like it because it’s an easier process,” said Yvonna Benson, secretary/bookkeeper at the school system’s central office who was involved with implementation of the system. “My daughter was sick one time and I had to be out, and this was a big help.”

Certified substitutes are entered into an online database. When a teacher enters his or her absence, the system makes automated calls to all the appropriate substitutes, Ellison said.

The substitute then has the option to accept or reject the opportunity to work.

Outside of the designated call times, substitutes can proactively search the system, through the website or a phone call, for openings.

So, the system gives an equal opportunity to all subs but can also reward those who put more effort into searching for openings. 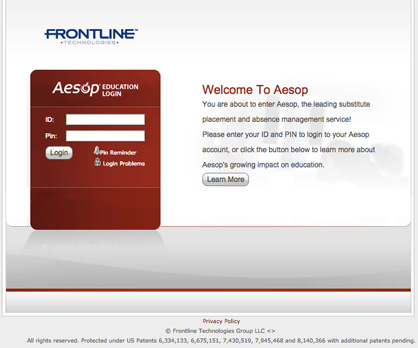 New system: The portal for Aesop Substitute Placement and Absence Management is found at www.aesopeducation.com.

There are about 770 people on the school system’s list of state-certified substitutes, Benson said.

Before implementation of the Aesop system, the process for finding substitutes varied by school.

At some schools, the teacher was responsible for finding a replacement, and teachers would often call the same handful of subs with whom they were familiar.

At other schools, administration would find a substitute.

The central office maintained a master list of subs, but various schools would commonly choose from unofficial or even unwritten lists of people that regularly worked at the school.

Aesop allows subs to set their availability based on the schools at which they would be willing to work, and what days they could work.

“It’s helping schools connect to people that they didn’t even know were on a sub list,” Ellison said. “This has opened it up to be district-wide.”

Administrators can use the system to print absence reports and see which teachers at their schools are absent on a certain day and who are the substitutes, a feature that can be useful when a principal is traveling and away from the school, for example.

The system also allows central office staff to monitor subs’ hours to make sure they don’t reach the 30-hour limit per week, which has become more important with implementation of the Affordable Care Act.

“It’s a great system,” Benson said. “I think it’s going to be great for the county.”

The payroll side of the Aesop system could be implemented in early 2016, Ellison said.

Substitute teachers, paraprofessionals, custodians and office staff are always in demand, according to schools officials.

Anyone interested in becoming a substitute should visit www.chilton.k12.al.us or call the central office at (205) 280-3000.