The Chilton County Tigers were unable to defend their home court on Tuesday night as area foe Selma came to town and knocked off the Tigers.

A youthful girls team continued their learning process by suffering a 56-12 loss at home to an undefeated Selma team.

A fast-paced Saints defense plagued Chilton County’s offense throughout the first half, as Tiger turnovers resulted in multiple fast break points. Selma outscored the Tigers 22-0 through the first period.

The trend continued into the second period before Morgan Dennis put Chilton County on the scoreboard with two free throws. However, Selma led 37-2 going into the half. 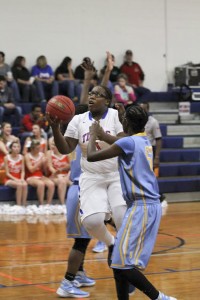 Lexis Blackmon finds an opening down while driving into the paint against Selma on Tuesday. (Photo by Brandon Sumrall / Special)

Baskets by Lexis Blackman, Dennis and a free throw from Malika Lykes did a little to keep pace with the Saints in the third period, Selma extended its lead 50-7 at the end of the period.

Blackman started the fourth period with a three-point basket for the Tigers and a Kaley Lucas basket would be all the points for Chilton in the final period, as Selma forced Chilton County to continue to seek out that first victory.

The last time that the CCHS varsity boys met the Saints, the game ended on a buzzer beater that gave Selma the win. This time the game would again live up to the excitement level of the previous matchup with an overtime thriller.

Unfortunately for the Tigers, the outcome was the same as the Saints went home with a 55-52 win.

Selma played a ball control game, and the tempo in the first half was slow. With the game tied at two, Jordin Swindle drained a three-pointer to give the Tigers their first lead of the game.

A 4-0 run by the Saints started the second period and was eventually ended by a three point basket by Donte Davis and a pair of free throws by Jaquarius Martin that put the Tigers out in front by one, 15-14.

The teams played through a 19-all tie before a Saints three-pointer sent the game to the half with Selma leading 22-19.

Down four early in the third, Tolliver Gilliliand knocked down a three-pointer to draw the Tigers to within one point.

A 5-0 run by Selma ended with two free throws by Hatch, but another Saints basket had the Tigers trailin 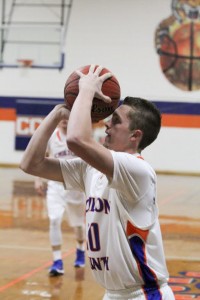 Chilton County’s Tolliver Gilliliand prepares to launch a last second shot before time expires in the game. The contest ended up going to overtime. (Photo by Brandon Sumrall / Special)

The Saints quickly added three more points to their lead at the start of the fourth period before the Tigers began their slow and steady climb back.

Trailing by five with just over a minute to play, Martin dropped two free throws to make the Saints lead three, and a free throw by Selma was answered with another basket by Martin that brought the score to 45-43 with 47 seconds to play.

Martin squared things up with another basket with just 36 seconds left. However, a shot at the buzzer by Gilliliand was deflected by the Saints, and the game went to overtime.

Gilliliand made up for the blocked shot at the end of regulation by drilling a three-pointer to start the overtime period and drained two points from the free throw line to put the Tigers out in front by five.

Two unanswered baskets by the Saints cut the Chilton County lead to one. The Tigers one-man show in the overtime period again stepped up, as Gilliliand drained two more from the free throw line and gave the Tigers a 52-49 lead with a minute to play.

The Saints answered with a basket of their own just six seconds later and cut the lead to one point with 35 seconds to play. Two Saints free throws with just one tick left on the clock gave the Tigers just enough time to inbound and launch a prayer from mid-court.

The desperation heave from Hatch bounced off the back of the iron and sealed the victory for Selma.

Gilliliand led the Tigers with 13 points while going four-for-four from the charity stripe and three-for-eight from behind the arc.

By Brandon Sumrall | Special to the Advertiser Despite an early lead by Jemison girls basketball, it was Thorsby that... read more