Verbena sets the pace against Billingsley 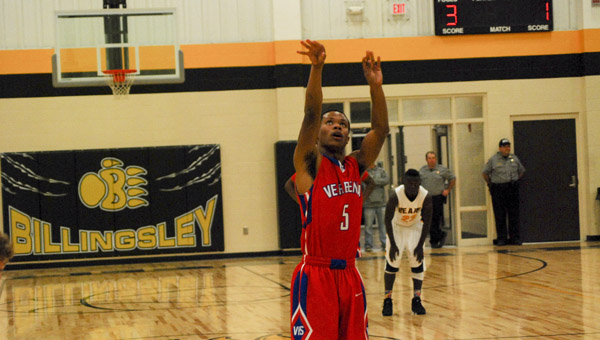 The boys squads captivated the crowd by putting on quite a show Monday night. Verbena won 63-47 and played the entire second half with a double-digit lead over host Billingsley.

“You learn to get a little more disciplined with every game,” Verbena boys head coach Mark Cleckler said. “They start trusting each other to be where they’re supposed to be. You could tell after the first game that they missed last year’s seniors, and now they’ve realized that they have to fill the role.”

A pair of seniors fueled the Red Devils’ offensive success, as Juwan Tyus had a game-high 22 points and Dorian Parker finished with 15 points while maintaining a frantic pace for most of the game.

“Once we get that first bucket, it’s game on,” Parker said. “We like to push the pace because we’ll actually start turning the ball over if we don’t.”

Jacob Clecker had a tough night shooting the ball, but was able to manufacture nine points and just miss joining the double figures party.

Mid-range jumpers were a large part of Verbena’s offensive efficiency. As the game wore along, several players looked very comfortable at burying pull-up jump shots from various spots on the court.

A bright side offensively for the Bears was the ability to knock down three-pointers on a consistent basis. Billingsley finished with seven on the night, and it is an aspect of the game that can provide a building block moving forward.

“We’ve obviously got a long way to go, but it’s somewhere that we can teach from,” Billingsley boys head coach Tyson McLean said. “I thought that tonight we tried to play too fast, and we got to selfish with the ball at times. We got out of what we needed to do.”

Alex Cobb and Tommy Williams each drained a pair of treys, while Cobb finished with a team-high eight points. Five scored at least five points for the Bears.

“We’ve got several seniors, but we don’t have a lot of experience,” McLean said. “We’re trying to mix and match to get the five that together make a good team. That’s what we’ll continue to work on.”

Verbena’s boys B-team began the night with a 33-32 victory over Billingsley in a game that came down to the final seconds to be decided.

Imani Walls had a memorable performance in which he accounted for over half of Verbena’s point total. He tallied a game-high 17 points.

Verbena’s Candice Williams flies down the court and is pursued closely by a trio of Billingsley defenders. (Photo by Anthony... read more