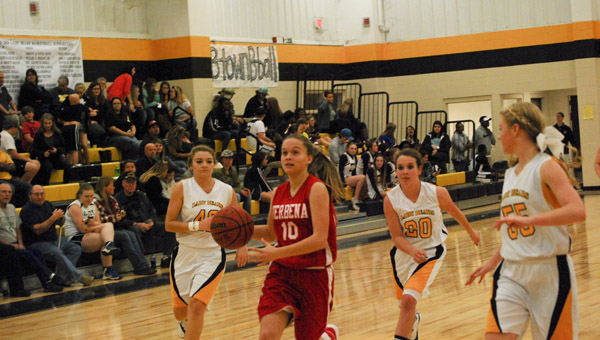 Verbena’s Candice Williams flies down the court and is pursued closely by a trio of Billingsley defenders. (Photo by Anthony Richards / Advertiser)

Verbena spoiled Billingsley’s basketball season opener Monday for both the boys and girls teams. With games under their belt, the Red Devils captured victories and stole the show on the road against the Bears.

“I’ve had this group for the last two years, but we’re still a very young team,” Verbena girls head coach Christopher Doss said. “I’m ecstatic because this was a big win for our program. It’s always nice to have those bragging rights over teams inside and near the county.”

The girls opened the night by finishing on top of a back-and-forth affair 39-31. JaNiya White led Verbena with a game-high 18 points while Candice Williams added 13 points.

The two proved to be a potent guard combination and one that seemed to provide relentless frustration for Billingsley.

“It’s all about keeping your cool and just waiting for when they try to press you,” White said. “That’s when you cross them over and go by them.”

The Bears were able to dictate the game’s flow early on, and as a result jumped out to a 10-7 lead at the end of the first quarter.

Kenzie Glass was a major reason why, as she knocked down the game’s first two baskets and both from long range. She went on to finish with a team-high 14 points.

“We’ve practiced for about a week and a half straight, but we were nervous,” Billingsley girls head coach Shunn Bailey said. “I’m proud of them because this was not bad for it being the first night.”

Tasha Parker was a force to be reckoned with on the boards and finished with eight points, which mostly came on put backs around the rim. However, she and the rest of the Bears also could not capitalize on many more second-chance opportunities.

White and Williams helped Verbena grab a 17-15 lead heading into halftime, and quickly built a substantial lead with a 10-2 run to start the second half.

“We’ve got two pretty quick guards that can handle the ball in transition,” Doss said. “They both did an excellent job of that tonight.”

Billingsley turnovers began accounting for points in transition, and the decision-making by the Red Devils on the fast break was on full display.

“Our defensive intensity and movement of the ball has really picked up, and you saw a continuation of that tonight,” Doss said. “Our philosophy is to play stingy defense and let it create offense.”

Glass maintained her aggressive nature at the offensive end and attempted to cut into the deficit by drawing fouls and converting on five of six free throw attempts during the fourth quarter.

The Thorsby boys basketball squad poses with the trophy, as the Rebels finished second place at the Westminster Thanksgiving Tournament.... read more