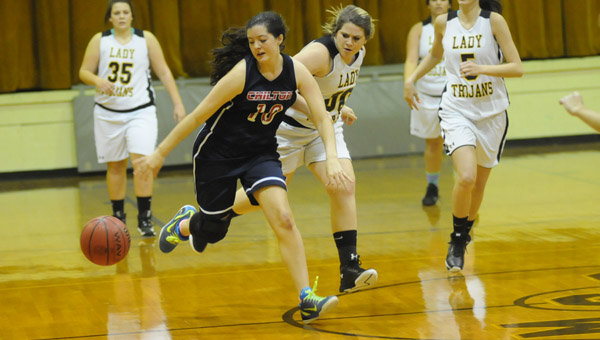 Chilton Christian’s Shayla Hamilton dribbles down the court with a host of Meadowview Christian defenders trailing behind. (Photo by Justin Fedich / The Selma Times-Journal)

The Meadowview Christian Trojans rolled past the Chilton Christian Patriots 57-29 on Dec. 3 at Meadowview.

“Things are starting to come together,” Meadowview Christian head coach John Robert Morton said. “We’re looking a lot better. We’re running up and down the floor, and we just overmatched them tonight.”

Justin McGuire added 14 points and three blocks, Jevar McGuire tallied 12 points, and eight rebounds and two blocks and Kaymon McGuire contributed 11 points in a victory that was never in doubt.

Meadowview blew the game wide open in the second quarter. McGuire drained a 3-pointer with 5:54 left in the first half and gave the Trojans a 27-11 lead.

Right before halftime, McGuire hit a layup with time running out which gave the Trojans a 43-19 lead at the midway point.

With 1:32 left in the third quarter, Jeremy Lee knocked down a 3-pointer and put his team ahead 53-24. Soon after, Chris Maul made a contested layup to give Meadowview a 55-26 advantage.

Morton said the team had roughly 10 less turnovers than in the last game, which was a key to the large margin of victory.

“We’ve really cut the turnovers down and that’s the difference in the basketball game,” Morton said.

Like the boys’ game, the girls’ contest between Meadowview Christian and Chilton Christian was never in question for the Trojans as they won 62-38 on Dec. 3 at Meadowview.

“She had a lot of layups and a lot of fastbreak points,” Meadowview head coach Scott Gunter said of Freine. “She handles the ball real well.”

The Trojans had no trouble scoring against the Patriots, as four Trojans finished in double figures.

“We jumped on them real early. We played good defense early,” Gunter said.

Meadowview was ahead early 25-5, but Chilton Christian tried to come back in the second quarter. The Trojans held the Patriots off, however, as Meadowview led 32-15 at halftime.

By the end of the third quarter, Meadowview was ahead 51-28.