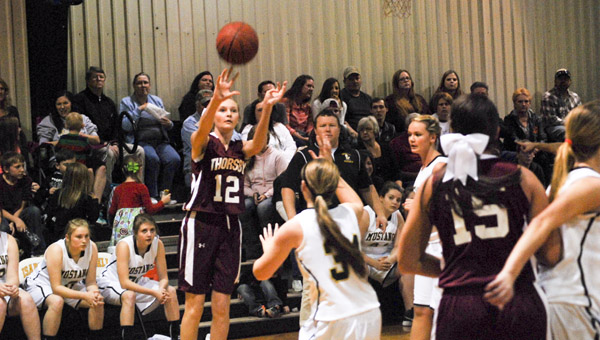 Thorsby’s girls varsity basketball team was just too much to handle for Isabella, and the Rebels defeated the Mustangs on the road 46-30 without its head coach, who had to miss the game due to a family commitment.

“Those girls played without the benefit of having a coach,” Thorsby substitute head coach Chris Wood said. “It just showed how prepared they were and how they knew what they were supposed to do in order to play like they did.”

Isabella’s free throw shooting was off target from the opening tip. As a result, the Mustangs found themselves down 14-8 after the first quarter and in a 25-14 hole at halftime.

“We got really good effort including from all three of our subs,” Wood said. “We took the ball and made our free throws when we needed to.”

Lilly Barnett led all scorers with a game-high 14 points, as she proved to be clutch in both her passing and shot selection.

Barnett is a junior and has been playing at the varsity level for the past three years. That experience and time on the court was on display Friday night with the unique circumstances that the team was faced with against Isabella.

“We were nervous at first, but it really wasn’t any different,” Barnett said.

She ran the fast break on several occasions while also creating turnovers on the defensive end.

“We fought through some fouls, but the whole team just stuck together,” Barnett said. “Our seventh and eighth graders really stepped up and did their part.”

Synia’ Chattman was productive as well for Isabella with a team-high nine points. Both guards showcased their skills, as the backcourt matchup lived up to expectations.

Caley Booth added six points for the Mustangs and attempted to lead a comeback in the fourth quarter with a couple of made baskets. However, 12 points is the closest Isabella could get to erasing the deficit.

“They put together some baskets and started pressing us, but we got the ball to her and she knew exactly what to do and when to settle it down,” Wood said. “I’d say that she [Barnett] was our player of the game.”

Thorsby’s boys B-team won in similar fashion with a 33-11 win on the road against fellow county opponent Isabella.

The Thorsby boys basketball squad poses with the trophy, as the Rebels finished second place at the Westminster Thanksgiving Tournament.... read more