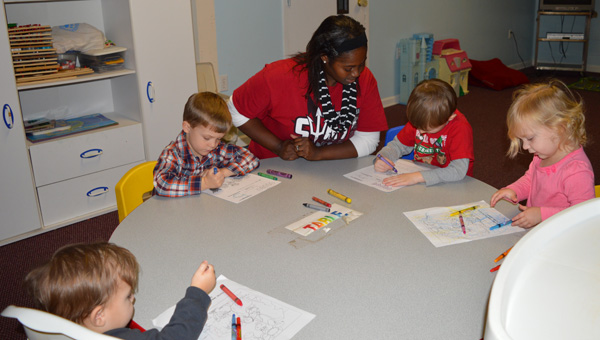 By Whitney Denson | Special to the Advertiser

The Cherubs Childcare ministry has been providing Christ-centered child care in the Maplesville area for years, and has more than doubled its enrollment in the past four months.

A ministry founded by Ebenezer Baptist Church in Stanton, Cherubs is a non-profit organization that offers an educational and religion-based curriculum for children.

Bro. Danny Rasberry of Ebenezer Baptist Church said Cherubs was formed around 2003 after he and other members of the church saw the need in the community for a childcare center.

“We talked about how we wanted the children to have a safe environment where they could learn and grow spiritually,” Rasberry said. “We also wanted parents to feel confident about leaving their children at Cherubs while they went to work.

“Before the ministry began, there were very few childcare options for people in the community other than home daycares.”

With 23 currently enrolled children, Cherubs has more than doubled its enrollment since the beginning of the 2015-2016 school year.

“I think people are becoming aware that there is a daycare here,” Rasberry said. “Plus, it has gained a reputation for providing in the community.”

The ministry follows a curriculum that is similar to a Vacation Bible School program, according to Cherubs Director Robyn Nichols.

“We go by a theme every week,” Nichols said. “We have a daily Bible study lesson and will focus on a character from the Bible.

“The art that the kids make also revolves around the lessons.”

In addition to the religion-based curriculum, Cherubs also takes pride in its approach to prepare children for kindergarten.

The toddler and pre-school classes participate in age-appropriate lessons under the instruction of childcare employees, where they are taught skills such as writing, drawing and reading. 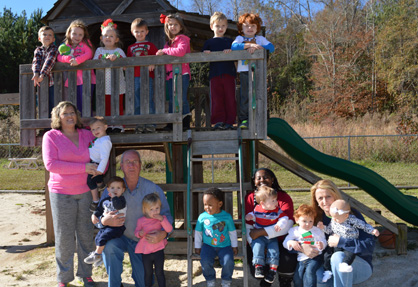 “We teach the educational concepts than any pre-school would teach, such as the alphabet and numbers,” Nichols said. “But even the educational lessons are Christ-centered.

“Our main concern is that the children at least have a basic knowledge of God and begin building a relationship with Him.”

Located in a church building which formerly served as Ebenezer’s fellowship hall, the childcare center assists families residing in the Maplesville, Stanton, Clanton, Valley Grande and other surrounding areas.

The ministry’s location in Stanton serves as an ideal position to serve multiple counties with quality child care that would be otherwise unattainable.

Maplesville resident Gina Riley praised Cherubs for its dedication to the well-being of its children.

“I am amazed at how this ministry always puts children first,” Riley said. “The church will take up love offerings to help support the daycare.

“I’ve worried when the enrollment has gotten down to four or five kids, but the church found a way to keep it open because of the need in the community.”

Riley shared that she has been thankful for Cherubs during the adoption process of her daughter.

“My daughter is a child in guardian and she came to us when she was 2 weeks old,” Riley said. “Being a mom and working as well, I had to find childcare.

“I was referred to Cherubs, and we have been so blessed ever since. I’ve never walked away with a sense of uneasiness when leaving her.”

According to Riley, the lessons taught at Cherubs extend far beyond the walls of the center.

“Even when I’m tired, Zoey reminds me to pray at night, and she always says the blessing,” she said. “It has become routine for her.”

The result of the Christ-centered curriculum is not only beneficial to the children themselves, but also rewarding for the parents and employees that watch them grow and develop into Godly individuals.

As the Christmas season quickly approaches, the church and childcare center at EBC is focused on sharing Christian values by sponsoring children in need and teaching the “true meaning of Christmas.”

“My favorite part is when you get to draw all kinds of things like Jesus,” 4-year-old Ali Brown said. “We learned about when baby Jesus was born.”

“One time, we colored Adam and Eve, and Noah feeding the animals,” 3-year-old LynLeigh Buckner said.

“I color pictures of God and Jesus and numbers, and then I hang all my pictures on the wall,” three-year-old Briar Denson said.

“I like when we put all the things we made on the Christmas tree,” 4-year-old Zoey Sturgeon said.

With the spark in enrollment, the childcare center has made some recent renovations to accommodate the growing number of children, including an expanded play and school area.

While Cherubs settles into its new numbers, the community remains thankful for the ministry.

“Our goal as a church is to present the Gospel to as many people as possible, as often as possible,” Rasberry said. “I believe that Cherubs has made a positive connection within the community.”