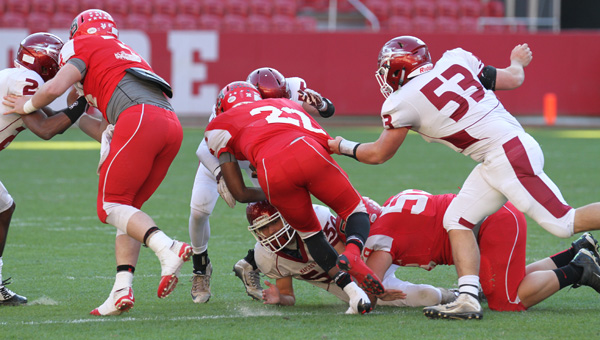 Nowhere to run: The Maplesville defense, including Will Harrison (No. 53), stops Cedar Bluff’s Ivory Starr on Thursday. (Photo by Brandon Sumrall)

Not to be lost in Maplesville’s explosive offensive performance in Thursday’s Class 1A state championship win over Cedar Bluff is the play of the MHS defense.

Though the Red Devils allowed more points and total yards (354) than they are accustomed to, the Maplesville defense still held its opponent below its usual output and made more than enough plays for the Devils to win, 59-24.

Cedar Bluff averaged 44 points per game during season and was almost as good in the state playoffs despite enhanced competition, averaging 43 points per game in four postseason games.

The lowest output of the season for the Tigers was the last game of the regular season, a 16-13 loss to Sand Rock, which finished with a 7-3 record in Class 3A.

The loss was Cedar Bluff’s only loss of the season.

Maplesville held seven of 13 opponents this season, including the playoffs, to zero points or a single score.

Cedar Bluff had three first downs in each of the first two quarters.

The Tigers managed 48 total yards in the first quarter and had 91 total yards at halftime.

Cedar Bluff’s first possession of the game yielded two first downs, but one came on an offside penalty against Maplesville.

The other was one of Ivory Starr’s nine rushing attempts on the drive, which accounted for all of the plays in the possession.

The drive ended when Trevor Wallace tackled Starr short of the first down marker on fourth down.

Cedar Bluff’s next four drives ended with a safety on a snap over the punter’s head after he was tackled in his own end zone by Coty McClellan, another turnover on downs on an incomplete pass with Will Harrison in coverage, and two punts by Ross Johnson.

The Tigers got on the scoreboard at the end of the first half with an eight-play, 31-yard drive capped off by a 7-yard touchdown pass from Josh Decker to D.J. Chapman with 1:37 remaining in the first half.

Maplesville’s offense answered and scored a touchdown with seconds left in the half to make the score 23-6, and the Red Devils were well on their way to the school’s third state championship, and second straight.

In the third quarter, after a punt on its first possession of the second half, Cedar Bluff’s second score was aided by a pass interference penalty against Maplesville, which was followed by a 30-yard touchdown pass from Decker to Jamie Abernathy.

The Decker-to-Abernathy combination struck again on their next possession, on a 75-yard touchdown pass play.

Well out of range of a comeback, Cedar Bluff saw a promising drive ended by a Jerry Nix III interception to begin the fourth quarter.

Nix III was in coverage on an incompletion that resulted in a turnover on downs on Cedar Bluff’s next possession, but the Tigers did put up a touchdown in the quarter on the next possession.

Maplesville’s Jeremy Williams put the exclamation point on the win, and scored points for the team’s defense, when he recovered a fumble and ran it back 40 yards for a touchdown with time winding down.

Corey Hall led Maplesville with 13 tackles, and Nate Watson had 11.