Clutch shooting from the free-throw line sealed the deal for the Isabella varsity girls, as they won a highly contested game 38-35 on the road against county foe Jemison.

“I’ve had this group since they were in seventh grade playing on varsity, so its about there fourth year playing together” Isabella head coach Jared Day said. “They have improved tremendously, and I’m looking forward to some good things.”

Jemison trailed from the start and were down 16-13 at the half. However, they slowly chipped away at the deficit and made a late charge, as Karmen Mims drilled a long-range bomb that tied the game at 35. 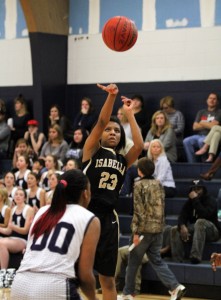 “When you’ve got a young team, it’s all about the process of trying to blend them in,” Jemison head coach Robert George said. “We’ve got to find that leadership.”

Caley Booth of Isabella was fouled on a three-point attempt at the other end of the court and stepped to the free-throw line with 15 seconds left.

The suspense built as she rimmed out the first two shots, but the senior put the Mustangs on top for good with a swish on the third.

Isabella point guard Synia’ Chattman scored a game-high 17 points, six of which came in the fourth quarter as Isabella clung to its lead. Booth also finished with 10 points while Mims led Jemison with 10 as well.

“Last year I didn’t shoot much,” Chattman said. “The position has become natural, and attacking the basket will bring open shots.”

Isabella’s varsity boys struggled from the start to keep pace with Jemison’s fast-break offense. The result was a 79-29 blowout... read more