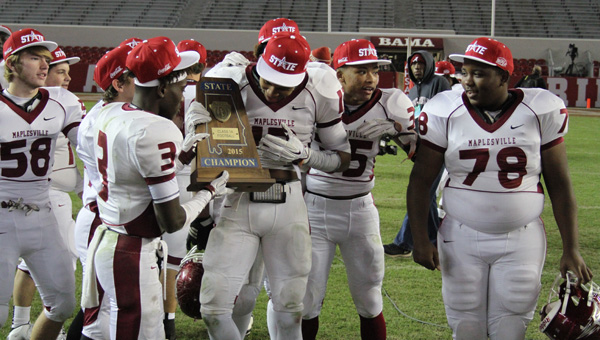 The Maplesville Red Devils are the champions of Class 1A for the second straight season following a decisive 59-24 victory over Cedar Bluff at Bryant-Denny Stadium in Tuscaloosa on Thursday.

Offense was on display throughout as both teams consistently moved the ball up and down the field.

The Red Devils maintained a balanced approach and were able to find effectiveness both through the air and on the ground.

Terence Dunlap led the way as he has for most of the season. Workhorse performances have become common on a weekly basis. That was no different as he finished with a game-high 262 yards rushing on 24 carries.

His five total touchdowns set the record for the most scores by a player in the history of the Class 1A title game en route to earning Most Valuable Player honors for the second straight year.

“Terence is a tremendous athlete with the ball in his hands,” Maplesville head coach Brent Hubbert said. “He seems to find those little creases, and I’m glad he’s back again next year.”

The front seven set the tone early on with a defensive stand to force a turnover on downs at midfield on Cedar Bluff’s first offensive possession.

After a three-and-out, the fourth down snap sailed over the punter’s head and he chased it down in the end zone, but was quickly corralled for a safety by Corey Hall and Coty McClellan for the game’s first points.

The Red Devils made it count with an ensuing seven-play drive that went 74 yards and was capped with a 3-yard touchdown run by Dunlap, who followed a block from right guard Tyrone Davis into the end zone.

“One of our strong points all year has been our offensive line,” Hubbert said. “It was something we needed to work on early in the season, and those five guys up front got better every week.”

Dunlap and Spencer combined to convert three straight first downs on the ground prior to the score, as Maplesville led 9-0 with less than a minute left in the first quarter.

The offense went back to work. Dunlap scored his second rushing touchdown of the game with a highlight reel 35-yard run in which he bounced off a defender at the line of scrimmage and preceded to outrun the Cedar Bluff secondary.

The Tigers capitalized on a turnover with points following a 7-yard touchdown on a fade pass to the left corner of the end zone. Cedar Bluff attempted the same play on its two-point conversion attempt, but Jerry Nix III was not to be fooled for a second time.

Maplesville took back the momentum heading into halftime with a precision two-minute drive that mixed both run and pass plays. Spencer fired a strike to Trevor Wallace on a slant from 12 yards out to give the Red Devils a 23-6 lead at the break.

“We’ve got a quarterback that can throw the ball, but we just haven’t had to use him,” Hubbert said. “We knew that they were going to pack the box.”

Wallace was a reliable target in the passing game and finished with a team-high 71 yards on six receptions. He also proved his versatility with a pair of punts pinned inside the 20-yard line.

“Trevor has been that guy for three years, but people just haven’t recognized it,” Hubbert said. “He plays everything, and he’s just a tough kid that gets it done.”

Dunlap found the end zone twice in the third quarter with a 35-yard pitch-and-catch from Spencer and a 5-yard run off the left side of the offensive line. The extra point extended Maplesville’s lead 37-12.

The Red Devils led 44-18 entering the fourth quarter following a 15-yard touchdown on a play-action pass from Spencer to Stevonta Bradley. It was Spencer’s third passing score of the game.

Maplesville put the game away with a 61-yard touchdown run from Dunlap and a 40-yard fumble return for a score by Jeremy Williams.

“It’s just been a lot of preparation,” Maplesville senior linebacker Corey Hall said. “I’m just glad that we were able to make history. There is never an easy day, and I’m just thankful for everybody that went through it with me.” 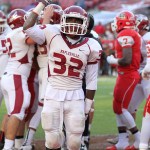 Celebration: Corey Hall celebrates following a touchdown—one of many Maplesville scores during the Class 1A title game. 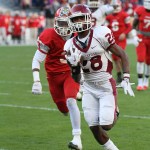 On the loose: Terence Dunlap breaks into the open field and outruns a defender—a common sight throughout the game. 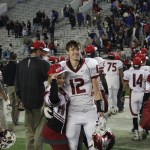 Emotional moment: Adam Harrison of Maplesville takes a moment to take a picture with a Red Devil cheerleader on the field after the game. 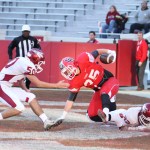 Two points: (Left to right) Coty McClellan and Hall combine to tackle the punter in the end zone for a safety and the first points of the game. 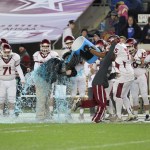 Bath time: Maplesville players dump the Gatorade bucket on their coaches in the waning seconds of the contest.

Clutch shooting from the free-throw line sealed the deal for the Isabella varsity girls, as they won a highly contested... read more