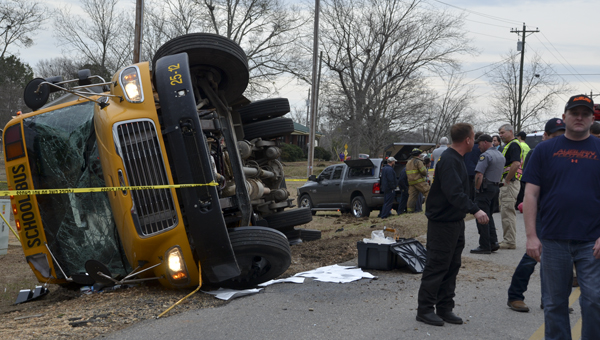 The driver of a Chilton County bus that overturned in January was sentenced this week. (Photo by Stephen Dawkins)

A Chilton County bus driver was sentenced for a January crash that left several children injured.

Donna Davis, 41, was charged with seven counts of reckless endangerment, a Class A misdemeanor, according to court records.

Davis was employed by the Chilton County Board of Education as a school bus driver.

On Jan. 22, Davis was driving her school bus on Enterprise Road in Clanton and was in the process of taking children home from school.

At 3 p.m., the school bus Davis was driving left her lane of travel and went off the road, ultimately striking a concrete drainage pipe, which caused the bus to roll on its side.

There were 17 children on the bus, according to a press release from the 19th Judicial Circuit District Attorney’s office.

Injuries ranging from bumps and bruises to a fractured neck were reported.

Davis was also traveling 48 miles per hour in a 35 mile per hour zone.

Davis was sentenced by Chilton County Judge Glenn Goggans to a six month suspended sentence and a $250 fine and court costs in each case.

Davis was also given two years of unsupervised probation.

“We are fortunate there were no more serious injuries, or this would have been a much different case,” District Attorney Randall Houston said in a release. “The sheer lack of care and concern for our children is unfathomable.”

A 45-year-old man who robbed a Clanton business at gunpoint in 2014 was sentenced on Tuesday to 25 years in... read more