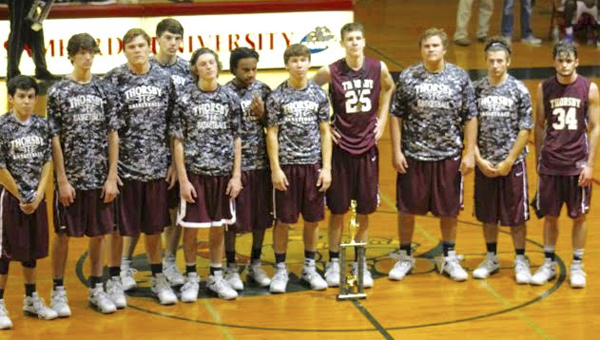 The Thorsby boys basketball squad poses with the trophy, as the Rebels finished second place at the Westminster Thanksgiving Tournament. (Photos Contributed)

The Verbena basketball program had a lot to be thankful for over the holiday break, as the varsity boys defeated county rival Thorsby 80-74 and won the Westminster Thanksgiving Tournament hosted by Samford University in Birmingham.

The tournament was the first action for Verbena in the 2015 season, and what a way to kick things off. With the victory, Verbena begins the rest of its regular season slate with momentum, and, more importantly, confidence.

The difference in the contest was Thorsby’s inability to remain out of foul trouble down the stretch against the Red Devils’ aggressive attack offensively.

Verbena earned a trip to the championship game after defeating host Westminster School at Oak Mountain 60-54.

Christian Fortner continued to show amazing ability despite being a freshman. He finished just shy of a double-double with 19 points and nine rebounds in the championship loss. 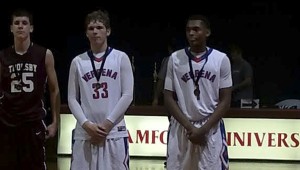 (Left to right) Christian Fortner, Reno Cleckler and Juwan Tyus pose after being honored as members of the Westminster Thanksgiving all-tournament team.

The Rebels put forth a complete team effort in both games and showcased the bravado that earned them an opportunity at the title.

Despite the relentless effort, both games resulted in a loss for the Rebels, as the girls lost a 41-40 nail-biter to Westminster. Kerri Robinson scored a team-high 15 points

Thorsby has shown its potential in every game this season, and now the question moving forward centers around developing the consistency that can be found in every champion.

In order to play for the title, the Rebels had to first take of business on Monday. They did just that, as the girls beat Sumiton Christian 60-41 while the boys also had a big 69-27 win over Sumiton Christian.

Lilly Barnett totaled 35 points in two games and was named to the all-tournament team for the Rebels, while Fortner joined Juwan Tyus and Reno Cleckler of Verbena on the boys’ side.

Thorsby will travel to Holtville Tuesday, Indian Springs Thursday and finish up the week on the road against Isabella on Friday. Next up for Verbena is a road contest against Holtville.

Verbena Running Back Dorrian Parker looks for running room against a tough Brantley defense. (Photo by Brandon Sumrall) As round... read more