This was the first year for the event to feature a community communion ceremony, which started at 6 p.m.

Jemison First Baptist Pastor Rex Kent led the ceremony by inviting the community to come together and partake in communion. 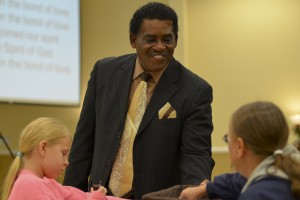 Individuals from the community were invited to participate in a community communion ceremony during the annual Jemison Christmas tree lighting.

“I know there are a lot of people sitting here tonight who go to different churches, but you are all invited to partake in the communion not as a Baptist or a Methodist, but as a Christian,” Kent said. “We are all members of the body of Christ. I want you to look at the person sitting to your right and the person sitting to your left, and smile at them. They are your brothers and sisters in Christ.”

Kent said it is important for individuals to stay unified in a “fractured and divided world.”

“We are doing so much more tonight than eating a piece of bread and drinking a small amount of juice,” Kent said. “We are showing the world that we are one in Christ. We don’t all look alike, and we may not all believe the same things, but tonight we are unified.”

Several individuals passed baskets throughout the crowd as Kent led everyone in the ceremony.

After the ceremony concluded, everyone was invited outside to countdown for the 18-foot Christmas tree to be lit.

Entertainment started at 7 p.m. in the auditorium with performances from Hannah Ellison and Chloe Belle Miodrag, who played the violin; Hannah Tierce, who sang; and Laura and Jill Vinzant, who sang and played the guitar.

The Chilton County Queens, the Swedish Fest Queens and the Relay For Life Queens were called to the stage and recognized.

The event also recognized the second “Mr. and Ms. Jemison.”

The concept was to recognize two people who have been influential in the Jemison community. 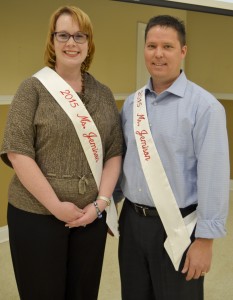 McGriff said Millard has lived in Jemison since 1995 and during his time in the city he has established several businesses catering to the residents including photography, real estate and is now the owner of the Chris Millard Agency of Allstate Insurance.

“Chris constantly looks for ways to assist in any of the activities with our city as he strongly believes in community involvement and support of the local merchants,” McGriff said.

Dr. Lisa Green was named “Ms. Jemison” for her work in the city.

McGriff said Green is a native of Chilton County and opened Jemison Eye Care in 2002 in Jemison.

“In 2010, Jemison Eye Care was named Business of the Year. Dr. Green has served two terms on the Chilton County Chamber of Commerce and is now working with Schaeffer Eye Care. She will continue to be the optometrist in Jemison. Dr. Green feels God has greatly blessed her by allowing her to pursue her entire optometry career in Jemison.”

The two were called up on stage and given white sashes, and the two will also participate in the Jemison Christmas parade on Dec. 5 at 11 a.m.

Sarrell Dental and Eye Care sponsored free pictures with Santa, and a live nativity was held at 5 p.m. with youth from Jemison First Baptist.

The Chilton County Commission voted Monday to set up a new procedure for appointing individuals to various county boards. The... read more