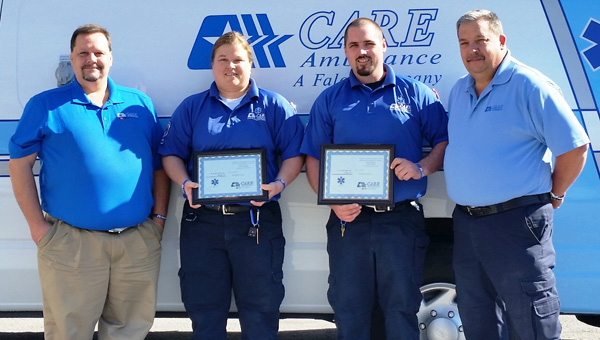 By Ashley Burks | Special to the Advertiser

Two CARE Ambulance employees were awarded with Quarterly Employee Awards on Nov. 20, but the recognition is not stopping there.

Michelle Glass, a paramedic, and Mitchell Keener, an EMT, have also been nominated for the Sophus Falck Award for going above and beyond the call of duty after an Oct. 18 incident in Clanton.

Medics were called to the scene in the 200 Block of Third Avenue after a double shooting that left one victim dead and one in serious condition.

Glass and Keener were not the original crew called to the scene, CARE Ambulance Manager Dewayne Whatley said.

“We know the family because we carry the husband to the hospital,” Whatley said. “Mitch and Michelle were not the original crew that showed up to the call, but they wanted to check on the family to see if they needed anything.”

The elderly couple that also resided in the home did not have much, and Glass and Keener decided to clean the scene for the family.

“This crew went and rented a carpet cleaner and cleaned up the blood for the family,” Whatley said and added that he was later contacted by family to thank him for what his crew members did. “It takes a special person to go out of their way to do something like that. I was very, very proud of them because it was late at night and they could’ve been in bed.”

Once a year, the Sophus Falck Award is presented for excellence in service and for going above and beyond the call of duty.

Glass and Keener are the only nominees for the East Coast of the United States, Whatley said.

“It would be amazing if they win it out of 40,000 employees, but just to be nominated is an incredible honor,” he said. “I’m like a proud papa. You can try to instill value in your employees, and to see it come true makes you proud even though you have no knowledge of what they are doing. They didn’t have to do that, but they did.”

Glass and Keener are the only Alabama employees to ever be nominated for the Sophus Falck Award.