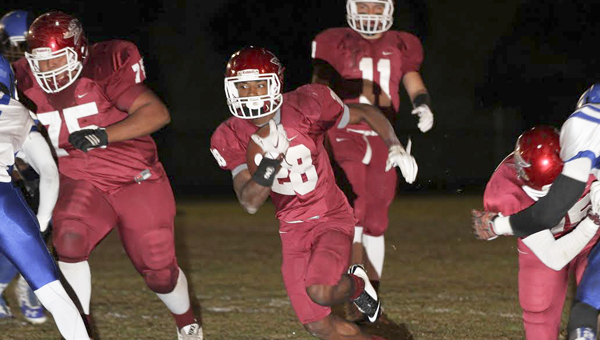 Terence Dunlap (No. 28) runs for yards behind Tyrone Davis (No. 75) and the rest of the offensive line. (Photo by Brandon Sumrall)

Maplesville was put to the test but won a 36-28 shootout at home Friday against Georgiana in the quarterfinals of the Class 1A state playoffs.

Entering the game, Georgiana (11-2) had not allowed a single point in either of its first two postseason games. The Red Devils (11-1) changed that in a big way by posting 36 points on the scoreboard, 24 of which came before halftime.

“We thrive off the crowd’s excitement,” Maplesville senior linebacker William Harrison said. “Once we get going, there’s nothing that’s going to stop us.”

Maplesville gained 500 total yards on the night, the majority of which came behind a punishing rushing attack. Terence Dunlap accounted for 330 yards on the ground and contributed toward 14 of the Red Devils’ 21 first downs.

It did not take long for Maplesville’s running game to establish itself. As the game wore along, the offensive line imposed its will and won the battles in the trenches.

Senior Corey Hall punctuated each of Maplesville’s first half scoring drives with touchdown runs of five, 10 and six yards.

The Red Devils carried a 24-8 lead into the half.

The defense flew from sideline to sideline and matched Georgiana’s speed, which had given so many teams trouble throughout the season.

“We’re not real slow, either,” Maplesville head coach Brent Hubbert said. “We heard all about how much speed they [Georgiana] had, and that kind of ticked our guys off. We wanted to challenge them to see if they wanted some contact.”

William Harrison, another senior, led the charge with pad-popping hits that brought the crowd to its feet on several occasions.

As the Maplesville lead grew, Georgiana began to get away from its comfort zone offensively of running the ball. The MHS secondary took advantage, as a pair of seniors, Trevor Wallace and Jerry Nix, picked off passes in the game.

“If we could get ahead of them, we knew that they would have to stress their offense and do things that they didn’t want to do,” Hubbert said.

With the lead cut, Dunlap responded with a kickoff return to the Georgiana 30-yard line. He eventually punched it in for a 3-yard touchdown on the first play of the fourth quarter to regain a two-possession lead for the Red Devils, 30-16.

The offenses continued to march down the field and trade points in the second half. Maplesville put together a methodical drive that ended with a 13-yard touchdown run by Nix, as his first carry of the day helped put the game away for good.

“It’s definitely a little more special being my senior year,” Harrison said. “A bunch of us are just trying to make the best of it.”

Maplesville will host Linden next week in the semifinal round of the playoffs, with the winner earning a trip to the University of Alabama’s Bryant-Denny Stadium for the state championship round.

Maplesville’s playoff fate on the line