Maplesville’s playoff fate on the line 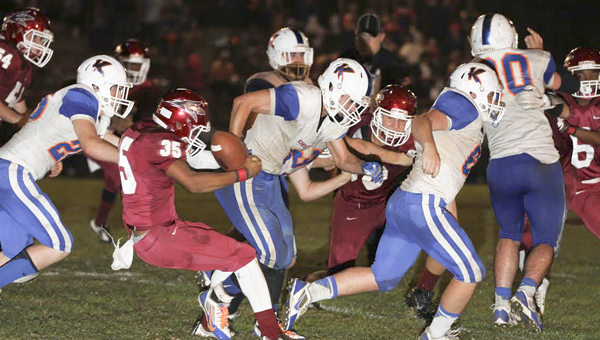 Maplesville’s Timothy Bradley (No. 35) strips the football from a Kinston ball carrier earlier in the playoffs. (File Photo)

Maplesville enters the quarterfinals of the Class 1A state football playoffs riding a wave of momentum after two straight wins in which the Red Devils outscored its opponents 99-18.

“Once you get to the third round, you better be playing like that or else you’re not going to stay in it,” Maplesville head coach Brent Hubbert said.

Its opponent for this week is Georgiana, who has not allowed a single point yet this postseason. The game is scheduled to kickoff at 7 p.m. at George Walker Jr. Stadium in Maplesville.

“They have a lot of athletes, and their only loss was to a [Class] 5A team that was undefeated before being beat in the second round of the state playoffs,” Hubbert said. “It will definitely be a tall task.”

The deciding factor in the game will be Maplesville’s ability to convert drives into points on the scoreboard. Establishing running lanes will go a long way in achieving that goal.

Terence Dunlap will look to find room behind an experienced offensive line that has perfected its cohesion throughout the season.

“Our offensive line has really come together and done a great job of opening up running lanes and also providing some protection for the quarterback,” Hubbert said.

Over the past weeks, Dunlap has continued to embrace his role as a workhorse within the offensive game plan.

“We’re excited about the way that our kids have played the last five to six weeks,” Hubbert said. “Since the Tanner loss, practices and attitudes have turned around. It has been a big difference.”

Defensively, the Red Devils have excelled in all phases. Each unit will be challenged with slowing down the speed that Georgiana has at the skill positions.

“Preparation is key at this point,” Hubbert said. “It’s all about getting ready for what they do and what we want to do on both sides of the ball.”

Whichever defense limits the big plays will have the advantage in the game. These two teams are destined for a tight game that could come down to a late game drive that decides either school’s playoff fate.

“Good teams are all that’s left,” Hubbert said. “We hope that our experience of being in some big games plays a role that benefits us.”

It was a complete team effort put forth by Jemison’s varsity boys basketball team, as the Panthers defeated West Blocton... read more