“I think because I was adopted, I understand that children who are adopted can face certain stigmas,” Tierce said. “Sometimes children who are adopted or who are up for adoption think they are that way because no one wants them, or that it is strange to live with a family that is not your own. My goal is to encourage others who have gone through similar circumstances and show them that adoption is a good thing.” 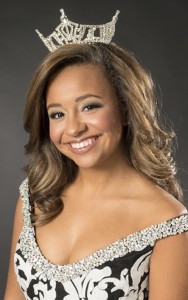 Tierce shared her story of being adopted at just three days old and growing up facing questions from her peers about her adoption story.

“People would ask me sometimes if I was adopted or they would ask how it felt to be adopted so I understand how other people can field questions from people who are curious about it,” Tierce said.

Tierce’s mom, Mara, said as soon as she held Hannah for the first time after going through the process of adopting Hannah, she felt a connection with her daughter.

“Being Hannah’s mom is as natural to me as breathing,” Mara Tierce said. “I am very proud of our adoption story, and very thankful to God that he chose me to be Hannah’s mom.”

Tierce, who was crowned Miss Jefferson State on Oct. 3, is using her platform, “Putting Focus on Adoption,” to speak to others in the community about adoption.

Later this week, she will appear on the Christian radio station WDJC to talk about her story, and will meet with Gov. Robert Bentley on Nov. 21 as he plans to sign a proclamation declaring Nov. 21 National Adoption Day in Alabama.

“I learned that Gov. Bentley is also an adoptive parent so that was really neat,” Tierce said.

President Gerald Ford originally made the first National Adoption week proclamation, and in 1990, the week was expanded to a month due to the number of states participating and the number of events.

National Adoption Day is traditionally observed in courthouses across the nation as thousands of adoptions are often finalized simultaneously.

Tierce shared some statistics about adoption saying there are 36 couples waiting for every one baby placed up for adoption.

She also said three years is an average time for children to wait to be placed out of foster care for adoption.

“I am very thankful that I was adopted,” Tierce said. “I hope to share my story to help encourage others.”

A Chilton County jury found a Jemison man guilty on Tuesday of sex abuse of a child less than 12.... read more