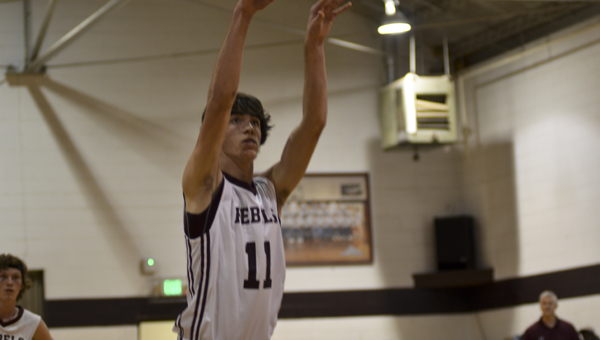 The Thorsby Rebels varsity basketball team opened up the 2015 season with a 58-44 home victory Tuesday against Indian Springs.

Senior Brock Higgins nailed a three-pointer to give the Rebels a 12-10 lead after one quarter of play. He finished the night with a team-high 14 points including a pair from beyond the arc.

However, Thorsby trailed 27-21 and were in search of offense heading into halftime.

“If you’re not shooting well, you have to rely elsewhere,” Thorsby head coach Tim Fortner said.

It did not take long for the Rebels to manufacture some points, thanks in large part to its defense, which kicked up the intensity and frustrated Indian Springs.

“We tried putting on some full-court pressure in order to get some turnovers and easy baskets,” Fortner said. “Our defense in the second half is what got us back into it.”

Takeaways sparked a 13-0 scoring run to begin the third quarter, and the deficit quickly turned into a comfortable lead. As a result, Indian Springs scored its first basket of the second half with 25 seconds left in the third quarter.

Thorsby asserted themselves in the second half by diving for loose balls and making the hustle plays when it mattered most.

“I feel confident that I can put all of them in and they’ll hustle and give me what they’ve got,” Fortner said. “We’ll continue to get better as the year goes on.”

On top 34-29 at the end of the third quarter, the Rebels built a 10-point lead early on in the fourth quarter.

Indian Springs cut into the lead with a run of its own, but Thorsby quickly halted any hope of a comeback. Senior Benjamin Thornton forced some steals and made a pair of baskets that once again gave the Rebels a double-digit cushion.

“It has been great seeing us work together to come up with a plan to win games this year,” Thornton said. “I feel like the seniors need to do anything we can to help the team find ways to win.”

The Rebels never looked back, as it maintained the lead the rest of the game while outscoring Indian Springs 37-17 in the second half.

Senior Calvin Plyler showcased his skills around the basket and used his size to earn a double-double with 10 points and 11 rebounds, while Bailey Sellers pulled down nine boards of his own.

“Our season will be determined a lot by their [senior] attitude,” Fortner said. “Are they going to be leaders who step up to the challenge? They really came alive in the second half.”

Thorsby finished second in Area 9-2A a year ago behind Vincent, which wound up making a trip to the Class 2A Final Four in Birmingham. Vincent enters the season as the favorite yet again within the three-team area.

“There is a lot of potential in this team to be one of the best that we’ve had in the last couple of years,” Thornton said.

Prior to the varsity game, the B-team outlasted Indian Springs 29-27 for its first win of the season. Tyler Jackson led the team with 12 points followed by John Ron Wood with seven points.

It was a big night, as both the Thorsby Junior High girls and boys basketball teams opened the season with... read more