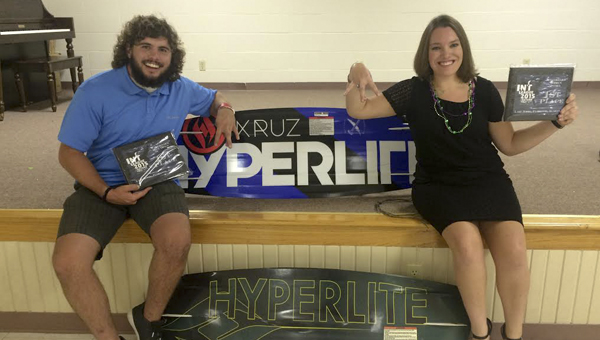 Lake Mitchell is the home to two National Wakeboarding Champions.

They each finished first in the regional tournament on Lake Jewel in Florence. After two days of competition, they had the highest scores of any rider in their respective divisions in the United States.

“The INT has given me a lot of experience and to have the feel of riding behind different boats,” Kaylee Doucet said.

Bernier has been wakeboarding for 12 years and has critiqued his style while spending time in Kansas and Tennessee before moving to Alabama. The process was kick-started once he arrived at Lake Mitchell and has grown throughout the past decade.

During that time, he started Mitchell Militia Wakeboarding School, offering lessons for those interested in learning how to wakeboard or further hone their craft.

“Lake Mitchell is a secret when it comes to boating in Alabama,” Bernier said. “It’s really been so rewarding. It’s weird to call them my students because they’re more like my friends and family.”

Members of the Militia are those that have successfully mastered a flip on the lake. Doucet is a proud member of the club and has been a student of Bernier’s for the past several years.

“I’ve been wakeboarding for about four years and just started competing in the INT last year,” Doucet said. “I just enjoy the ride and try to challenge myself.”

The “Mitchell Militia” has produced its share of talent and had a realistic shot of earning a third national champion prior to a last minute injury to Bristol Gibson. He is a student at Chilton County high school and won the state championship in the intermediate division.

“It has helped to grow the sport, and give riders like Kaylee the success that she has gotten so far,” Bernier said. “There are plenty of kids that just need guidance and a direction before taking off in the sport. That’s the whole reason I started the school.”

Competitions can be a valuable tool in the steady advancement of a person’s wakeboarding interest.

According to Bernier, the INT league offers a huge help in maintaining progression due to the fact that it brings fellow boarders together. This allows them to collaborate and feed off of each other.

“It is suppose to be like building blocks,” Bernier said. “You’re shooting for a personal-best score, and the key is to get your tricks to add up to get to that next division.”

Each trick has a point value with the harder degree of difficulty producing more points. A style score is added that factors composition, amplitude and the technical aspects of a run. It allows for the judges to grade the overall look and feel.

A typical INT competition lasts a weekend and consists of a two-fall format, which allows for a run to continue after a rider’s first fall.

“When you’re on the biggest stages, just ride like you’re on Lake Mitchell,” Bernier said. “The closer you feel to home, the better you’ll perform. That’s something I’ve always tried to emphasize.”

The pressure can carry extra weight in an individual sport such as wakeboarding compared to various other team sports. However, Bernier stresses to his students that they are not alone.

“I like to relate the ‘Mitchell Militia’ as a team,” Bernier said. “That tends to put some of the pressure onto the collective body instead of an individual.”

Another difference that Bernier believes stands apart from other mainstream sports is the feel of routine practice session.

“When you get into practice it is normally about the daily grind, but wakeboarding is fun the whole time,” Bernier said.

Doucet’s entro title proved that she has mastered her current phase and will turn her focus in the near future toward taking the step up in competition to the Novice division.

She has made a rapid climb since she joined the INT last year, and continues to look for even more.

“You’ve got to have the support from family and friends,” Doucet said. “I’ve been very blessed and thankful. We’re never going to quit trying to win championships.”

The next step for Bernier is the Pro Wakeboard Tour where he hopes to find success. After brief stints a year ago, he now looks to become a permanent fixture and an ambassador for the sport.

“It truly takes determination and perseverance,” Bernier said. “It is not going to happen overnight, but I would like to think that it can happen pretty quick if you’re determined. I can get you to where you want to go.”

For more information or details, visit the Mitchell Militia Wakeboarding School at Facebook.com or call Bernier at (205) 299-7060. If you want to catch a glimpse of the Militia at work, just head to Hachet Creek on any weekend throughout the year.

With only a couple of weekends left in the 2015 college football season, the Chilton Auburn Club will host its... read more