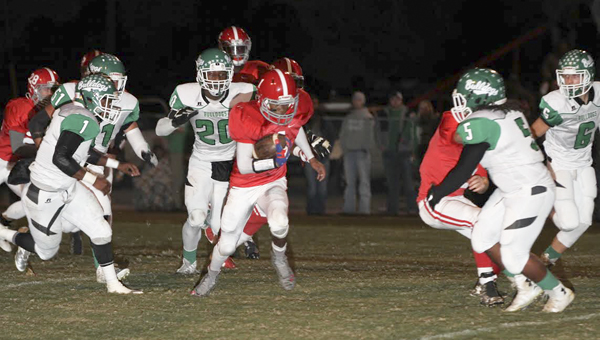 As round two of the AHSAA Class 1A state playoffs got underway on Friday night, the Verbena Red Devils found themselves facing a perennial powerhouse in the Brantley Bulldogs.

Despite trailing by only seven at the half, the Bulldogs would pull away in the second half to take a 47-26 win over the Red Devils.

A quick three and out by Verbena (8-4 overall; 2-3 region) to start the game would give the Bulldogs their first possession on the Red Devils’ side of midfield. Brantley (10-2 overall; 5-1 region) would capitalize on the good field position with a 27-yard run by Tommy Spivey to put the Bulldogs up early 7-0.

The two teams would exchange possessions before Verbena would find their way into the end zone with a 56-yard scoring drive that would be capped off on a 32-yard touchdown pass from Tristan Short to Anthony Miller. Miller would add the PAT to knot the game at seven late in the first quarter.

The tie would not last long as Xavius Coleman would field the ensuing kickoff at his own 32 and take it 68 yards for a Bulldogs touchdown to make the score 14-7.

The teams would exchange possessions again, before the Red Devils knotted the game at 14 with an 80-yard scoring drive capped off by a 4-yard touchdown pass from Short to Juwan Tyus.

After a missed field goal by Verbena with 3:29 to play in the half, Brantley took over at its own 20-yard line. One play later, Jacob Free broke loose for 80 yards and a Bulldogs touchdown to send the game to the half with Brantley leading 21-14.

Another three and out by the Red Devils gave Brantley the ball back at their own 18 where they would go to work on their next scoring drive that would be capped off with a 2-yard touchdown carry by Coleman to make the Bulldog lead 34-14 midway through the third quarter.

With 2:54 to play in the third, Short connected with Chris Cook for a 50-yard touchdown pass that pulled Verbena within 14 points of the lead, 34-20.

Again the Bulldog offense would find their way into the end zone, this time on a 31-yard run by Spivey that would move the ball down inside the Verbena red zone where he would later go in from 5 yards out to give Brantley a 40-20 lead late in the third.

The Red Devils looked poised to answer with a score of their own, but a Brantley sack of Short on forth and goal turned the ball over on downs.

A three and out by the Bulldogs offense gave Verbena another shot to cut into the Brantley lead and this time they would not disappoint, as Miller would climb the ladder over two Brantley defenders to pull in a 17-yard touchdown pass from Short to make the score 40-26.

The Bulldogs would add one more score late in the forth quarter, as a tipped pass would fall into the hands of Spivey who would return it 10 yards for a Brantley touchdown that would bring the game to its final score of 47-26.

Despite the loss, the Red Devils finished up what many would consider a very good season, a matter that was not lost on many of the Red Devil Seniors.

“It has been a privilege to play football at Verbena,” Senior Verbena Fullback Chris Cook said. “Over the course of the year we became more than just a team but more like brothers. The season didn’t end like we would have liked, but we had a heck of a year and I am proud to have been a part of it. We left it all on the field.”

Short completed 13 of 28 passing attempts for 280 yards and four touchdowns for Verbena through the air, while Cook led the ground game with 48 yards on six carries.

Free and Coleman each went over the 100-yard mark for the Bulldogs with Free finishing with 173 yards on 12 carries and four touchdowns, while Coleman had 104 yards on 16 carries.