Bears had no answers as playoffs end 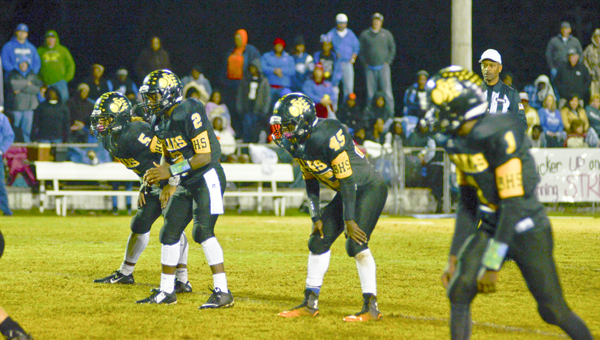 A crowded backfield of James Woods (No. 2), Derrick Dunigan (No. 5) and Tommy Williams (No. 45) await the snap. (Photos by Anthony Richards)

Billingsley’s playoff run came to an abrupt end with a 28-0 home defeat to Georgiana.

The difference in the game proved to be the Bears’ inability to limit big plays at crucial moments in the game.

“It’s been a wild ride and I wouldn’t have changed anything about it,” said senior wide receiver/defensive end Isaac Green.

Special teams came back to bite the Bears on several occasions. As a result, Georgiana led 12-0 heading into halftime with both touchdowns shortly following Billingsley miscues.

The second half continued Georgiana’s momentum with another score on a rapid two-play. After being position to stop a pair of two-point conversions in the first half, the Bears finally surrendered one, as the deficit extended 20-0 in the early minutes of the third quarter.

Every time that Billingsley strung together some offensive plays for the looks a threatening drive, turnovers or penalties would find a way to slow it down.

“Whatever we tried to get going tonight, just didn’t seem to work,” Tyson McLean said. “We didn’t get the job done and that’s just the way it is sometimes.” 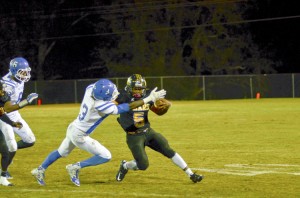 Derrick Dunigan runs through a tackler as he fights for extra yards on the ground.

The Bears committed three turnovers on the night, including a pair of second half interceptions that silenced potential drives.

Georgiana’s final score of the game was a 65-yard fumble return after Woods dropped back to pass and was hit. The ball popped straight up in the air and dropped into the arms of a defender who took it the distance.

“Once we got behind, he was trying to force it because he knew that we needed to score in order to get back in the game,” McLean said.

The first quarter had the feel of a heavyweight bout with both teams feeling out the other’s tendencies and trading punts in the process en route to a scoreless opening quarter.

However, Georgiana developed of rhythm toward the tale end of the first quarter and scored on the first play of the second on a 25-yard pass. The Panthers went for two points but Billingsley was in position to break up a pass attempt.

Billingsley began to move the ball as well but could not capitalize on several lengthy drives. The Bears were stopped short on a fourth down attempt in opposing territory and also unable to score on three plays inside the 5-yard line.

The turning point of the first half was a missed field goal that was caught in the air and returned 95 yards, which set up Georgiana with a first and goal situation.

Despite the loss, the current senior class has left the Billingsley faithful with its share of memories. The legacy appears in place moving forward as the next wave of upperclassmen look to step into the spotlight next season.

“We’ve got a very good nucleus coming back, but we’re going to miss their leadership and more importantly the type of young men that they are,” McLean said.

Smooth sailing into quarterfinals for Maplesville

Another postseason victory for Maplesville, and the outcome was never in doubt. The Red Devils scored early and often and marched onto the quarterfinals with a 50-6 road win against Marengo in Dixons Mills.

Maplesville compiled a complete game performance with both offense and defense handling its business from kickoff.

The Red Devils pounded Marengo with 433 rushing yards and a total of 613 yards of offense. Terence Dunlap carried the load with 184 yards and four touchdowns on 21 carries.

The defense could not be out done and it did its part by limiting Marengo to 123 passing yards to accompany a dismal 18 yards on the ground.

It was a big night, as both the Thorsby Junior High girls and boys basketball teams opened the season with... read more