Two additional suspects were arrested on Thursday in connection to the kidnapping and death of a 29-year-old Maplesville woman. 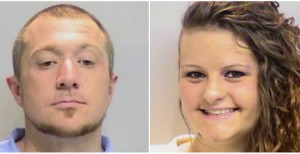 Marcus King George, 34, of Centreville and Alyssa Sue Watson, 22 of Centreville, were both arrested and charged with kidnapping first-degree on Thursday. The two were arrested in connection to the kidnapping and death of a 29-year-old Maplesville woman.

Both are currently being held in the Tuscaloosa County Jail on a $60,000 bond each.

Earlier this week, two other Bibb County residents were arrested and charged with capital murder in the case.

Michael Belcher, 31, and Chylli Bruce, 18, were charged on Monday night with capital murder in the death of Samantha Payne.

Squirrel hunters found Payne’s body near the Tuscaloosa and Hale County line in the Talladega National Forest around 9 a.m. on Monday, according to authorities with the Tuscaloosa County Homicide Unit.

Investigators are still working to determine the relationship between Payne and the four suspects charged in her kidnapping and murder.

Investigators believe that Payne, Belcher, Bruce and others were together in Bibb County on the night of Nov. 1.

Authorities previously responded to a suspicious vehicle/person call on South Sandy Road, near the area where Payne’s body was found.

Bruce and Stephen George, 27, of Brent, were arrested by Hale County Sheriff’s deputies for drug charges that day.

George is still in the Hale County Jail.

Belcher was also spotted walking nearby too, but was not arrested.

“We believe the car broke down after they were taking Payne’s body to the woods,” said Lt. Kip Hart with the Tuscaloosa Metro Homicide Unit. “Bruce and George walked to try to get some help from a guy at a shooting range nearby, and he thought it was kind of suspicious the way they were acting, so he called Hale County deputies.”

Belcher was also nearby but walking in the opposite way from Bruce and George.

“Belcher said his car broke down and he was looking for a ride,” Hart said. “Other than being a strange character, there was no reason for police to detain him or anything like that, so he was allowed to leave.”

When Payne’s body was found, deputies who encountered the three individuals last week remembered the encounter and started piecing things together.

According to court records, George said he was with the suspects when Payne was kidnapped and handed a knife to Belcher before Payne was killed.

George accuses Belcher and Bruce of assaulting Payne at Belcher’s place of business. He also told authorities that Belcher knocked Payne out, “then told them to tie her legs and hands.”

Payne was put in the car and continually assaulted, according to court records.

George says Payne was still alive when they got to the woods in South Sandy Road, but he was not willing to participate in her murder, according to court records.

He said Belcher asked for his knife and he gave it to him before leaving the three of them in the woods.

Steven George has not been charged in connection to Payne’s death.

Friends of Payne have started a gofundme account to help Payne’s family pay for her funeral expenses.

Car decals are also being sold in memory of Payne at Durbin Farms for $3 each with all proceeds from the decal sales and/or donations to be given to Payne’s parents for funeral costs.