By Emily Sparacino | Special to the Advertiser 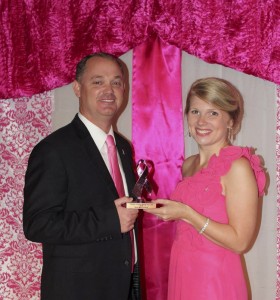 “Our family has been very much affected by cancer,” Parnell said. “It really inspired me to become involved in this fundraiser.”

“For the month of October, each of those men wore something pink each and every day,” Chilton County Relay For Life Community Manager Jeannie Smith said. “They brought awareness of breast cancer in Chilton County, they brought awareness of Relay For Life and they raised funds to continue the mission of the American Cancer Society. The heart of that mission is research for a cure.”

Parnell was introduced at a Nov. 5 event, “Men in Pink: Pink Tie Affair Dinner,” as the 2015 Chilton County Man in Pink for raising the most money of the 17 participants.

“It was a huge honor and a very just cause,” Parnell said. “I think it was a very successful first-year fundraiser, and I think it’s something that not only myself but almost everybody who participated in it would be willing to do again.” 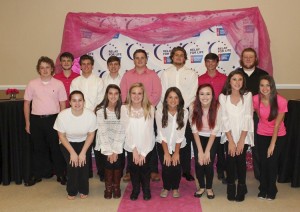 Chilton County High School SGA students gather for a photo at the Men in Pink: Pink Tie Affair Dinner on Nov. 5. The students helped serve food at the event, which was held at the Jemison Municipal Complex. (Contributed)

To raise money, Parnell said he donated a Browning X-bolt stainless steel hunting rifle and sold raffle tickets for it for $25 apiece, along with sending emails to people asking for contributions.

Proceeds from ticket sales for the Men in Pink dinner event also benefitted Relay For Life.

All of the participants were recognized at the Nov. 5 event, which was held at the Jemison Municipal Complex.

“They each took the stage for a moment as an emcee read over their bio and why they chose to get involved,” Smith said. “(They are) a great group of people with such a huge heart. Chilton County … they truly care about curing cancer, and it’s evident in the hard work they do. We were so excited

Local cancer survivors whose stories were featured on the Chilton County’s Men in Pink Facebook page were also recognized at the Nov. 5 event, which included dancing and a live auction.

“We had a really great group of kids from the Chilton County High School SGA that came and served as waiters and waitresses,” Smith said. “They were absolutely phenomenal. They were tremendous.”

“We have several men that have already signed up for next year,” Smith said.

Two additional suspects were arrested on Thursday in connection to the kidnapping and death of a 29-year-old Maplesville woman. Marcus... read more