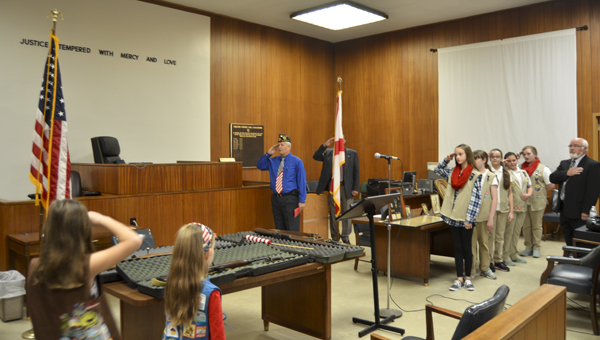 Girl Scout Troop 7012 led everyone in the Pledge of Allegiance during the annual Veterans Day Celebration Wednesday morning at the Chilton County Courthouse. (Photos by Emily Reed)

“Today, we thank those who served or are serving for our country,” post commander for American Legion Post 6 Jerry Grooms said.

Larry Robinson with American Legion Post 6 led a prayer, Girl Scout Troop 7012 led everyone in the Pledge of Allegiance, Jimmy Veazey led the crowd in singing, the National Anthem, and Margaret Collins led the packed courtroom in a rendition of “God Bless America.”

Grooms introduced the guest speaker, Tony Smitherman, a Vietnam veteran and chaplain and custodian at Martin Funeral Home in Clanton.

Smitherman spoke about what it means to be an American, and to have peace in the country is costly and sacrificial. 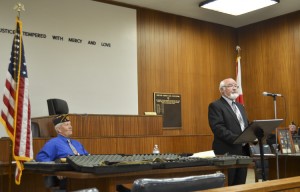 Tony Smitherman, a Vietnam veteran and chaplain and custodian and Martin Funeral Home in Clanton was the guest speaker for the program.

“America does not have what we have because it was given to us for free,” Smitherman said. “It cost something. We are constantly being told that our history needs to be rewritten, but our history is the blood in the ground from the men and women who gave their lives for this country. That is our history.”

Smitherman stressed that it is impossible to rightly govern without God.

Circuit Court Clerk Glenn McGriff shared with the crowd at the end of the program that the county is in the process of acquiring a bell that was on the U.S.S. Chilton.

“The bell is in Virginia right now, but it came off the U.S.S. Chilton and is named after this county,” McGriff said. “We are in the last stages of getting the paperwork signed and having it released from the Navy.”

McGriff said the plan is for the bell to be placed on a platform and featured at the Chilton County Courthouse.

“We want this to be something everyone in this county can be proud of,” McGriff said. “We plan to have a ceremony in the future to celebrate bringing this bell home.”

Nathan Bishop concluded the ceremony by playing “Taps” on the trumpet.

Everyone was invited after the ceremony to attend a reception at Chilton County Senior Connection for free refreshments.

Clanton’s Overhead Bridge has a deep history in the community. By Scarlett Teel | Community Correspondent When someone in Clanton... read more