Anyone researching family history in our area often finds an interesting mixture of nationalities, something we tend to expect in more urban areas.

One group that turns up fairly often is the Scottish. In the early part of the 1900s the McSwain family moved down to the Cooper/Clanton area from Cullman having come into north Alabama from South Carolina by way of Tennessee. Members of that family have stated that the McSwains came to the United States from the Isle of Skye, Scotland. 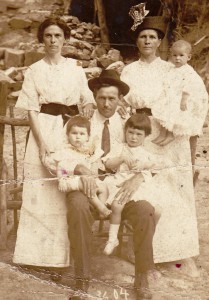 The McSwains were a well-known family in the Cooper and Clanton area. Pictured include Thad McSwain who is seated holding his daughters Louise and Mary, wife (left) Sidney Jones McSwain and sister (right) Lula McSwain Roberts holding her daughter Edna. The photo was taken in 1914 in Hot Springs, Ark. (Contributed)

As Tandy McSwain brought his wife and two children down from Cullman to Cooper, his daughter Gertie remembered him telling her and her brother, “You chaps sit up. We’re coming to the painted houses,” as they neared Clanton.

Unlike his brother Tandy, Thad McSwain became a successful businessman coming closer to our image of the thrifty Scottish merchants we read about in the early history of the southeastern U.S. It seems that those settlers tended to get along well with the Native Americans. Hughes Reynolds in “The Coosa River Valley” said these Scots “seemed to like the Indian women for they married extensively into the tribes. Many people now living in Georgia and Alabama are able to point with pride to their descent from Scottish-Indian ancestors.”

As we know, your surname does not have to start with “Mc” for your ancestors to have come from Scotland. If you are curious about names that might be Scottish, check this interesting website: http://surnames.behindthename.com/names/usage/Scottish.

And, you do not have to be Scottish to enjoy the lore and music of Scotland. Celtic music in general has become popular in the last few years. 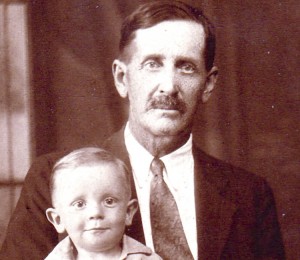 Tandy McSwain is pictured with his grandson Archie McSwain Taylor.

Chestnut Creek Heritage Chapel located in the Cooper community where Tandy McSwain raised his family is dedicated to helping people learn about, enjoy, and preserve their heritage. On Nov. 15 at 6 p.m., Jim Malcolm, a well-know Scottish folksinger and musician will be in concert at the Heritage Chapel. To learn more about this, visit www.chestnutcreekheritagechapel.com and see the “event” page.

–Ola Taylor is a Community Correspondent for The Clanton Advertiser. She can be reached at olataylor@gmail.com.