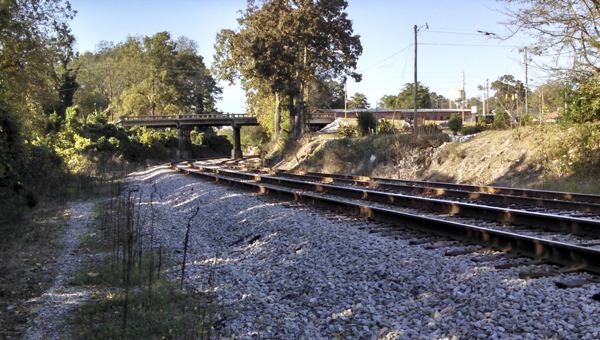 Clanton’s Overhead Bridge has a deep history in the community.

When someone in Clanton says the two words, “Overhead Bridge,” the connection is made immediately to the concrete bridge that crosses the CSX railroad just west of the U.S. Highway 22 West and U.S. Highway 31 North intersection—the one that has just been recently reopened after the widening.

The new intersection is so wonderful to drive through now. Several have said that they believed as did Dorothy in the “Wizard of Oz” that she and Toto were no longer in Clanton!

I am sure that the name of the “Overhead bridge” has never been officially designated as its name but never the less that is what the public has named it and did you know that the concrete bridge that we use now is at least the second one?

The first one was a wooden bridge that spanned the railroad. I have heard some stories about it.

One story was told to me by 93-year-old Billie Johnson Sasser of Clanton. Once, she was sent to walk across the wooden “Overhead Bridge” to the house of a Mrs. Askins to deliver a meal.

On the way home as she crossed the bridge, Sasser put out her hand to rake it on the wooden boards along the side—she got a handful of rotten splinters.

Her father Dr. Napoleon Johnson, set about removing the splinters and each time he pulled on one, it broke into two splinters.

She was looking forward to a trip to Tuscaloosa, so her father told her that all the rotten splinters had to be removed but that she would forget all of the pain by the time she got to Tuscaloosa.

One of their favorite things to do was to be lucky enough to catch one of the old steam locomotives going along the track beneath the “Overhead Bridge.”

As the locomotives puffed out the acrid black smoke, the kids loved to stand on the bridge to let the black smoke engulf them.

Along near the east side of the bridge one could step right into the second floor of the McCain’s mule barn.

Some of the town drunks liked to sleep it off in the feed troughs below. The little boys took advantage of this as they played along on their way home. The game was to have an aim good enough to drop straws through the cracks onto the sleeping men below to make them think a fly was bothering them.