Program to remember those who served 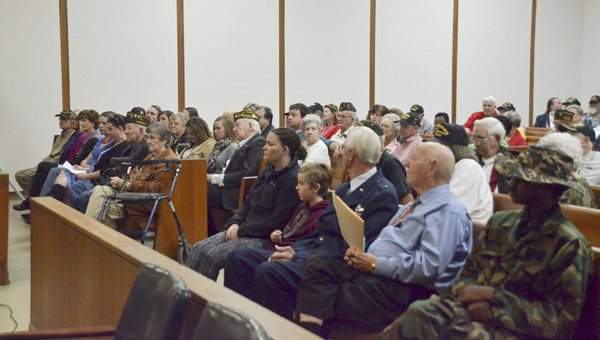 What an Honor: The crowd at last year’s Veterans Day program. (FILE PHOTO)

Local Chilton County veterans’ organizations are once again sponsoring the annual Veteran’s Day program to be held at 11 a.m. Wednesday on the third floor courtroom of the Chilton County Courthouse.

It has been a town tradition since it began in 1962, and 53 years later, continues to remind the county of the sacrifice that was made by so many men and women in order to ensure their everyday freedoms.

Many local veterans are expected to be on hand along with a highly anticipated crowd. Due to the growing number of attendees, this may be the last year for the courthouse to host the event.

According to Lally Bates of American Legion Post 6, Senior Connections has offered up its building in the Park Plaza Shopping Center as the possible site of next year’s program.

“They are going to have the reception afterward for everybody that shows up at the courthouse,” Bates said. “Next year they want to hold the meeting as well, which would hold more people.”

A pair of veterans will participate in the presentation of colors, including Jim Dunlap who served during World War II.

Girl Scout Troop No. 7012 will once again lead the pledge of allegiance, after doing it for the last couple of years.

Tony Smitherman has been invited as the guest speaker. He is a Vietnam veteran and a retired minister who served in the United States Army.

“This is his first time speaking at Veterans Day,” Bates said. “He is a good man and a good leader, and we’re proud to have him as our speaker.”

Jerry Grooms is the Master of Ceremonies and was influential in getting Smitherman to speak.

“Jerry [Grooms] told me that he had him [Smitherman] lined up,” Bates said. “We finally got someone who served in Vietnam and is none all over the county. It should draw a big crowd.”