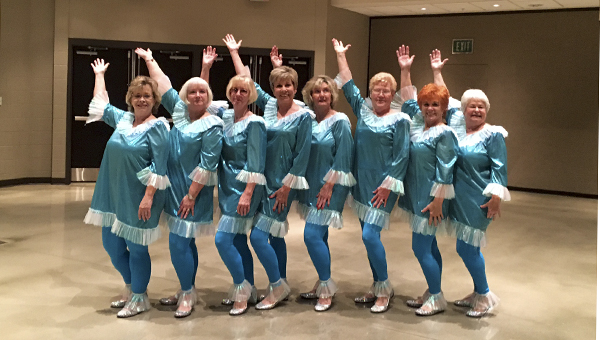 The Perfect Peaches dance team recently claimed first place in the line dance competition at the 2015 Masters Games of Alabama held at the Trussville Civic Center.

The group is compiled of citizens over the age of 55 years old and from the surrounding area. Helping to aid their achievement was the effort of the Senior Connections program and the Chilton County Chamber of Commerce.

The team consists of eight members with the oldest competitor being 73. Experience and dance history varies throughout the group. However, the main commonality that each member shares is the drive to learn something new no matter what age.

“They were surprised [to win] but I could tell that they had it in them because they caught on to the steps real quick,” dance instructor Judy Headley said.

According to Headley, the group had been practicing on its competition dance two days a week for four months leading up to the competition. She has been dancing for 24 years and teaching the majority of the group for four years. 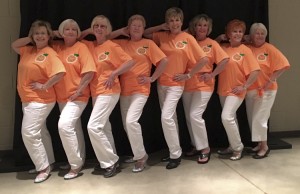 Ann Arnold and Hilda Acheson were the newest dancers. Due to having recently joined the group, their preparation time was cut in half. According to Headley, limited practice did not slow them down.

“I was so excited for them because to be able to go out and dance on stage is completely different than what you are used to doing. It took a lot of courage on their part.”

The Perfect Peaches won the top prize in a field that consisted of five other senior centers from around the state.

“I’m very proud of them that we were able to win and support Chilton County in that way,” Headley said. “I have considered it a privilege.”

The Masters Games of Alabama is held once a year. However, just because the Perfect Peaches are not competing, does not mean they cannot show off their skills elsewhere.

“We get invited to dance all the time,” Headley said. “We’re going Dec. 12 going to Centreville Senior Center to dance for them. Line dancing is wonderful for your memory and your balance.”