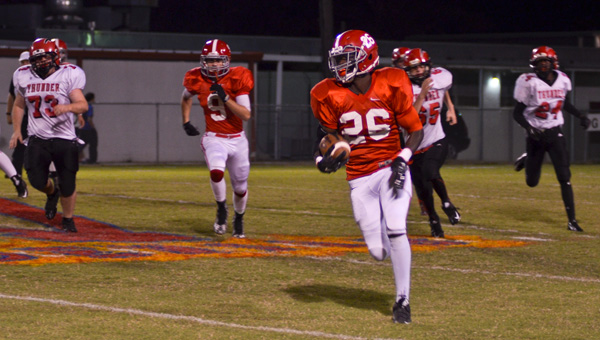 The scoreboard lit up early and often, as Verbena found the end zone without hesitation. The Red Devils (7-3 overall, 2-3 region) wrapped up the regular season with a 46-28 win Friday on senior night against Jacksonville Christian Academy (4-5, 2-4).

Verbena scored touchdowns on its first three offensive plays from scrimmage. Likewise, the defense did its job by forcing a trio of three-and-outs to begin the game and quickly grab a 21-0 lead in the first quarter.

“It helps get your team morale when you’re able to get both big points and big stops,” Verbena senior lineman Jacob Cleckler said. “Hopefully we’ll come out in the playoffs with that same mindset.”

With Halloween on the horizon, Verbena head coach Mike Harris gave the fans an early treat with a trick play to open the game. Tristan Short got the ball on a double-reverse and hit a streaking Juwan Tyus who had gotten behind the defense for a 67-yard touchdown pass.

“We do that all the time in games,” Harris said. “We’re just trying to have a good time out there.”

Hakeem Underwood scored touchdown runs of 54 and 30 yards in the game and showcased his game-breaking ability in the process.

Senior Dorrian Parker got in on the action with a 15-yard touchdown run of his own to cap a three-play drive, eternity for Verbena’s high-octane offense.

“Everything we did basically worked,” Harris said.

Verbena forced a pair of turnovers on the night as both Jacob Sanders and Raymond Bulger intercepted passes.

The Red Devils headed into halftime with a comfortable 40-13 lead. The second half flew by due to abbreviated quarters the rest of the game.

“We cut the second half down to 5-minute quarters, and I would want someone to do that for me,” Harris said. “We knew that they were young, and we just outmanned them. I’ve been on both sides of it.”

An explosive first half allowed playing time and experience for the young players on the team. This may prove valuable, as reliable depth can be the difference in making a deep playoff run.

“We just came out putting in the work and doing what we usually do,” Cleckler said. “Give 100 percent on every play, and the cream will eventually rise to the top.”

Parker added yet another score of 50-plus yards with his second touchdown run of the contest. His run put an exclamation point on a dominant overall performance and a memorable senior night.

Verbena will travel to take on J.U. Blacksher High School (7-3, 5-1) on Nov. 6 for the first round of the Class 1A state playoffs.

“We didn’t want to take a chance on anybody getting hurt for next week,” Harris said. “That’s when the season starts over.”