By Robert Blankenship | The Demopolis Times

The Sweet Water Bulldogs could not find a way to slow down Maplesville Friday night, nor could they find much running room against the Red Devil defense as the Bulldogs fell in their regular season finale, 41-0.

Big plays ignited the Red Devils (8-1) early, and it was running back Terence Dunlap who did most of the damage, having a huge night against the Bulldog defense.

In two first-half plays, Dunlap scored on touchdowns runs of over 70 yards each. Dunlap finished the game with 227 rushing yards and three touchdowns on only 11 carries.

Dunlap put the Red Devils on the board with 4:20 to go in the first quarter with a 78-yard run, and then early in the second, he found the end zone again, this time on a 71-yard run.

Between those two explosive plays, Red Devil quarterback Cole Spencer finished off a Red Devil drive with an 8-yard run. Together, the three touchdowns with one missed point-after, gave Maplesville a 20-0 lead midway through the second quarter.

Another big play late in the second expanded Maplesville’s lead as Spencer found Loftin Smith for a 56-yard touchdown reception. The point-after made the score 27-0 going into the half. 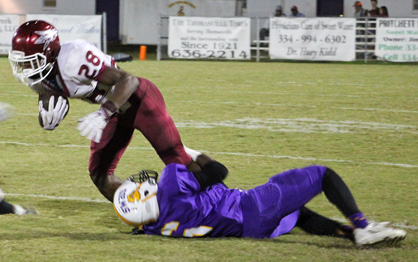 The Bulldogs looked ready to get back into the game on their first possession of the second half, driving the ball down to the Red Devil 15. But on third down, Branson Davis’s pass into the end zone was picked off by Trevor Wallace, who took the ball at the 1-yard line and returned it all the way back to the Sweet Water 18.

After an 8-yard gain, Spencer once again looked to Smith, who made the reception to the 2-yard line. It was Dunlap who finished off the drive, leading to a 34-0 lead with 7:22 to go in the third.

After a short series for the Bulldogs, Maplesville got its offense going again. After getting a first down, the Sweet Water defense made a big play as Jacory Brown, Wynn Thompson and Deshawn Blanks all made their way into the backfield and brought down Spencer for a sack and loss of 8 yards.

But the celebration was short as Spencer found Wallace on the very next play for a gain of 19 yards. After back-to-back runs of 13 and 15 yards by Dunlap, it was Corey Hall that got the call from the 1-yard line and took it in for the score.

The extra point completed the scoring with 1:12 to go in the third.

The Bulldogs held the ball through much of the fourth quarter, but the drive stalled on the Red Devil 40. Eric Jenkins, who led Sweet Water with 52 rushing yards on the night, got most of the carries, including a 2-yard gain on a fourth-and-1 to extend the drive.

The Maplesville defense allowed a total of 165 yards.

Maplesville will host Kinston on Nov. 6 for the first round of the Class 1A state playoffs.